1 The “Scary” Army Robot Dog Gets an Autonomous Tail to Help It Swim at 3.4 MPH

3 Rick Ross Reveals an Armored Vehicle for His Upcoming Car Show, It Has Louis Vuitton Seats

4 100 Modernized T-72 Tanks Reportedly Vanish, as “Thieves” Just Drive Off With Them

After it unveiled its new ATeMM (all-terrain electric multi-mission) vehicle platform about a week ago, Israel-based company Plasan introduces a new product for military patrols and special forces. Wilder is an ultra-light, mobile, and highly customizable armored vehicle with autonomous capabilities.
8 photos

What Wilder brings to the table is a lightweight and compact body, boasting the mobility and off-road capabilities of a racing buggy, while also offering the firepower that you normally see only on vehicles that weigh twice as much, as explained by Plasan.

The wheeler weighs 3.7 tons and has a payload capacity of 1,763 lb (800 kg). It features a patented suspension system that offers 370 mm of wheel travel, a mid-mounted 420 Nm engine, an 8-speed automatic gearbox, and a central driving position with panoramic view. Wilder provides Stanag 4569 Level 2 protection for four people.

And since we already mentioned Plasan’s new ATeMM vehicle, the Wilder can be turned into a 6x6 hybrid-electric by being paired with the all-terrain electric multi-mission module. Hooking it to the ATeMM will make it capable of carrying 2 tons of payload.

But that’s not all the new Wilder has to offer. In addition to being available with 4-wheel steering, you also get remote control of the entire vehicle. The Wilder comes with integrated drive-by-wire capability, is packed with sensors and cameras, which means it is suitable for fully autonomous operations.

Plasan used its Kitted Hull solution for the armored vehicle, with the comfortable monocoque cabin with air conditioning also offering high-end protection for the occupants.

Versatile and customizable, the Wilder is built to handle multiple missions such as reconnaissance and raids, and it can cope with the roughest terrains and conditions. Its rear cargo compartment can easily carry a standard NATO pallet with enough supplies and equipment for long-term missions.

Just like the recently unveiled ATeMM, the Wilder was also introduced at the Eurosatory international weaponry industry trade fair in Paris, which began on June 13 and will end on June 17. Plasan’s new lightweight and compact armored vehicle is showcased at booth EXT Pe6B, e231. Wilder will be available as a turnkey product or in kit form. We are yet to find out more about its availability and pricing. 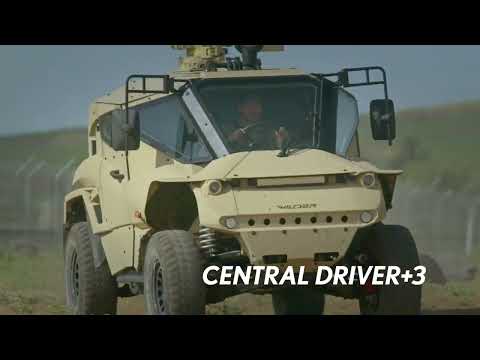