The disastrous use of tanks by the Russians in Ukraine isn’t stopping defense contractors from researching such platforms, though. Of course, even if they look like traditional tanks, these new machines are as modern as they get.

Take the so-called Type-X Robotic Combat Vehicle, developed over in Europe by Milrem Robotics and Kongsberg Defence & Aerospace. That would be an autonomous, AI-governed, tracked vehicle that could become a common presence on the battlefields of tomorrow.

Milrem shared the first details of the Type-X in the summer of last year, and now it comes back on the topic to inform us of the first firing of the Protector Remote Turret using this platform.

Made by Kongsberg, the Protector comes with a Bushmaster 30 mm cannon, and is just one of the various payloads the Type-X can carry, a list that also includes up to 50 mm cannons, anti-tank missiles, and a tethered drone.

The Type-X is considered as the base platform for something called the Nordic Robotic Wingman (NRW), a robotic fighting machine meant to support main battle tanks and infantry fighting vehicles.

The AI system that powers it can steer it to where it's needed, or it can be programmed with follow-me, waypoint navigation, and obstacle detection functions. When it floors it, the tank can reach speeds of up to 80 kph (50 kph) on the road, and has its own anti-artillery and mine protection.

Milrem plans to sell this thing to Nordic and Western European countries, but the U.S. military is said to be eyeing it, too.

The video below shows the Type-X in action with the Protector, firing at various wrecked cars that pose for targets. So, look away if you dread a future when robot tanks are in the picture. 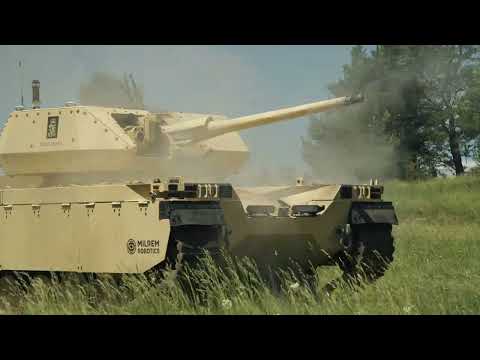