2 Ilyushin Military Plane Crashes in Russia, the Tragic Moment Was Captured on Camera

3 Pack of F-16s Meets Pack of Kfirs, Put on a Show Over Colombia

5 CV-22 Osprey Looks Massive During Landing, Hard to See As a Subtle Infiltrator
Up Next

There’s a New Way to Get Android Auto Wireless in a Car, Goodbye Annoying Cables

Home > News > Military Bits & Pieces
Otilia Drăgan
Just a couple of months ago, there was a lot of talk about Boeing “making history” with the first demonstration of an unmanned aircraft refueling another aircraft. After the F/A-18 Super Hornet, it was now time for the U.S. Navy’s E-2D Hawkeye command and control aircraft to be refueled by the MQ-25 Stingray drone, marking another milestone for this groundbreaking project.
7 photos

Boeing has done it again – during a test flight on August 18, from MidAmerica St. Louis Airport, the MQ-25 T1 test drone successfully completed a second unmanned refueling mission. After the pioneering demonstration of the MQ-25 refueling a Super Hornet, which was conducted earlier in June, this second test included the E-2D Advanced Hawkeye aircraft, a game-changing asset in itself, dubbed as the “digital quarterback,” due to its battle management capabilities.

The ultimate objective is for the MQ-25 to be capable of refueling every receiver-capable aircraft, so each of these demonstrations is an important step in achieving that. Plus, it helps the development team collect important data used to improve the final product continuously. This second test was also particularly important because Stingray will eventually be assigned to the carrier airborne early warning squadron, within the carrier air wing, which operates the E-2 C/D Hawkeye.

According to Boeing, both tests were performed at “operationally relevant speeds and altitudes,” preceded by what is called a “wake survey” that ensures the aircraft’s optimal stability before the actual contact with the T1’s aerial refueling drogue. The MQ-25 T1 is a test asset or a forerunner for the seven MQ-25 test aircraft that are set to be built, with two of them currently being manufactured.

Air-to-Air Refueling (AAR) has a long history and has come a long way since the early attempts in the twentieth century. On one hand, it became clear that this type of refueling is essential for aircraft endurance and stealth during strategic operations. On the other hand, it was considered a dangerous maneuver, for a long time. Using an unmanned aircraft to perform this operation not only decreases this risk, but it’s also more effective in many ways, including financially.

Boeing’s groundbreaking refueling drone conducted its first flight in 2019 and, by now, it has already accomplished two refueling missions for different aircraft – from the looks of it, it won’t be long until unmanned aircraft refueling becomes standard. 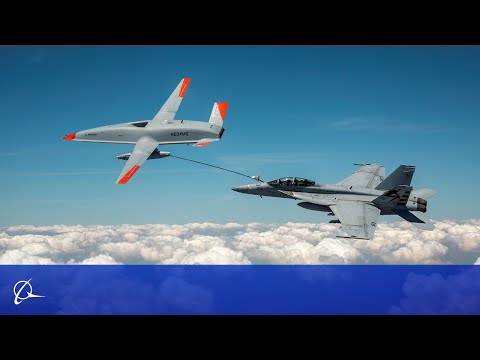