2 CV-22 Osprey Looks Massive During Landing, Hard to See As a Subtle Infiltrator

Pack of F-16s Meets Pack of Kfirs, Put on a Show Over Colombia

All of us with a passion for military aircraft probably know by heart the specs of the mighty F-16 Fighting Falcon. It would be interesting to see however how many of us know a thing or two about the IAI Kfir.
17 photos

IAI stands for Israel Aircraft Industries, and it’s a company that describes itself as a “leader in defense, aerospace, and commercial markets.” The bit that concerns us now is the defense one, because we’re here to talk a bit about the aircraft it makes.

The company presently specializes in producing a wide range of drones and other such systems, but when it comes to military aircraft, the star of the lineup is the Kfir. Based on the French Dassault Mirage 5, the warbird is described as an “all-weather, multi-role supersonic combat aircraft.”

For a while, the Kfir, introduced in the early 1970s, served the needs of the Israel Air Force. In the meantime, the fleet was retired, modernized, and delivered to partner nations, including Colombia, Ecuador and Sri Lanka. The U.S. used them briefly as well, in the 1980s, as unarmed adversaries for dissimilar air combat training.

The four Kfirs you’re looking at in the main pic of this piece (click photo to enlarge) are with the Colombian Air Force, and are seen here accompanied by an equal number of American F-16 Fighting Falcons. The planes got together over Colombia during Exercise Relampago VI in mid-July, a drill meant to provide “rapid integration into theater training, as well as joint, coalition and partnered missions.“

And given how rarely F-16s get to meet Kfirs in the air, this is too good of an opportunity to miss for our Photo of the Day section. 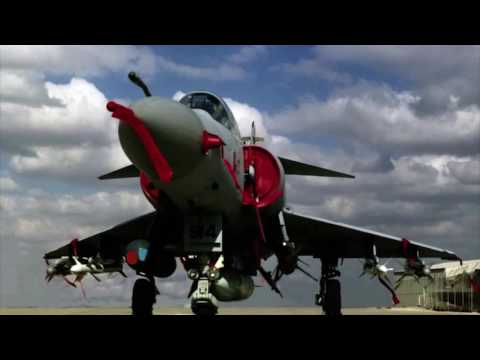