1 U.S. Navy’s Future VTOL Drone Is Best-in-Class, Hovers and Stares Like No Other

Home > News > Military Bits & Pieces
Daniel Patrascu
Aerial refueling for military aircraft is something that’s being done routinely these days, and it has been so for decades. But if advancements in technology keep the pace, the way this thing is done might change forever.
15 photos

Historically, air refueling - called by the military in-flight refueling (IFR) or air-to-air refueling (AAR) – has been around since all the way back in the 1920s. This approach at keeping airborne assets on the move didn’t catch, however, until the Korean war, when F-84 fighter-bombers flying in from Japan had to get their juice from B-29s.

Presently, there are entire families of planes handling this task, effectively being mobile gas stations for military airplanes and helicopters. And absolutely all of them are crewed.

Not the thing we have here, though. That would be the Boeing MQ-25, or the Stingray, a purpose-built aerial refueling drone made to extend “the carrier air wing reach.”

Having had its first flight in 2019, the MQ-25 proved it can do what it was created to do back in June, when for the first time ever it pumped fuel inside a U.S. Navy F/A-18 Super Hornet. The achievement made quite the fuss at the time, but to remind us all about the brave new world we’re living in, Boeing just released a new video of that stunt (attached below), as shot from the chase planes that went along for the ride, a King Air 300 and an A4.

Powered by a Rolls-Royce engine, the drone has a range of about 580 miles (930 km) when loaded with 15,000 lb of fuel. It carries the precious substance in drop tanks that can be attached to one of the two underwing hardpoints.

Boeing plans to test it in action some more in the foreseeable future, trying to see if it can “refuel other aircraft at operationally relevant speeds and altitudes,” so expect more videos such as this one to come our way. 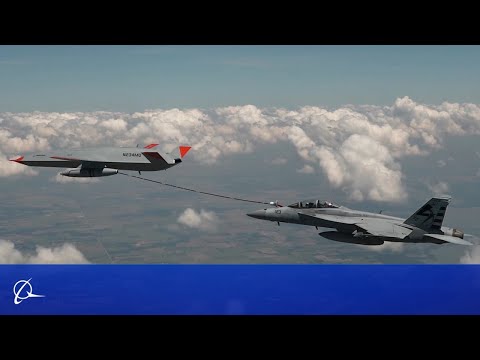