We may have chosen to go with a high-mounted exhaust just for good measure, but this creature’s probably not going to see much heavy off-roading, anyway.

With their lightweight anatomies and forgiving nature, small-displacement motorcycles can be an absolute blast to ride. I mean, sure, they may give you some trouble when it comes to keeping up with highway traffic, and you’re certainly not going to experience the insane adrenaline rush that comes with riding a big bike.

Nevertheless, it’s nice to have a machine which lets you goof around without worrying that you’ll be punished for the smallest of mistakes, right? When the said entity happens to also be as gorgeous as this scrambled Suzuki GN250, you can easily see why there doesn’t have to be a correlation between engine size and fun factor.

Forged by Purpose Built Moto of Gold Coast, Australia, the custom-made scrambler had once been a regular 1994 variant of the GN250 lineup. Tom Gilroy and his crew received the commission from a client named Shane, whose family had owned the tiny all-rounder for an extended time. Once it was passed on to him, he promptly decided to have it transformed into something unique.

Admittedly, PBM’s craftsmen have a bit of a soft spot for this platform, as their very first customer build was also based on a GN250. Since then, the Aussies tackled two more projects with such donors as their starting points, and the latest is by far the most stylish of them all! Opting to keep things relatively simple this time around, they proceeded to dismantle Suzuki’s commuter in preparation for a complete engine rebuild.

The humble 249cc thumper saw its cylinder head ported, subsequently receiving new rings, valves, and springs. Moreover, the piston was worn out to the point where a refurbishment wouldn’t suffice, so it’s been discarded in favor of a much fresher replacement. With the internals taken care of, Tom’s experts added a brand-new carburetor from Mikuni, topping it off with a DNA air filter in the process.

In terms of exhaust mods, the lads busied themselves with retrofitting a motocross-style FMF Powercore 4 muffler onto the stock two-into-one headers. Then, they were happy to call it a day for the powertrain side of things, and their attention turned to bike’s running gear. Unsprung territory is now home to stainless-steel spokes and a pair of Excel rims, measuring 19 inches up north and 18 inches down south.

For a grippy contact patch both on and off the asphalt, the wheels were enveloped in high-end Pirelli Scorpion Rally tires. At the back, suspension was beefed up with progressive YSS shock absorbers, which go a long way to remedy the GN250’s slouched posture by raising the rear end a little.

The original telescopic forks have been kept in play, but they were rebuilt and stiffened to handle unpaved roads with ease. In between the stanchions, you’ll be spotting an aluminum front fender built in-house, and it’s held in place via a custom bracket. Further up, there’s an LED headlight flanked by small, yet sufficiently bright turn signals.

We find a digital instrument panel from Daytona in the cockpit, along with a ProTaper handlebar featuring discreet switches, Diamond grips, and underslung mirrors. PBM decided that retaining the OEM gas tank was the way to go, so they simply repainted it in a black base topped with yellow and red pinstripes.

These are the colors found on the flag of Papua New Guinea, which is where the client’s family had once lived. Lastly, the Purpose Built squad tweaked the GN250’s rear-end geometry, revising its subframe prior to the installation of black leather saddle. Those twin LED taillights double up as blinkers, and an unobtrusive license plate holder rounds everything out. 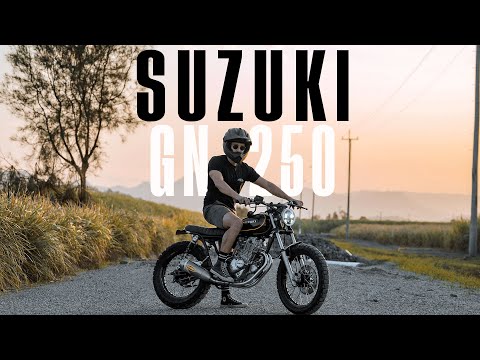