5 2024 Volkswagen Touareg Puts On Some Digital Makeup, Do You Like the CGI Refresh?
Up Next

Home > News > Renderings
Aurel Niculescu
Toyota and its luxury subsidiary Lexus were on a big roll just recently at home in Japan, where the 2023 Tokyo Auto Salon and Tokyo Outdoor Show occurred concurrently between January 13 and 15.
32 photos

That gave them a bundle of opportunities to showcase just about anything, from feisty WRC-inspired car concepts to overlanding-focused big and premium SUVs. But now the hype is over, and maybe it is time for Toyota to move its attention back toward the crucial North American market.

There, it has an interesting year ahead of it. For example, the $27,450 Prius ‘Hybrid Reborn’ looks sleeker than ever, and the $39,950 Crown crossover sedan has signaled the return to North America of the all-new sixteenth generation after the nameplate’s big hiatus, among others.

The Japanese automaker is also keen on presenting even more goodies, such as the upcoming 2023 Prius Prime PHEV, the new Trailhunter series (most likely a measured response to Honda’s TrailSport), or the 2023 Corolla Cross Hybrid. Notice how most of these introductions are all of the hybrid variety? Well, if we are to heed the advice of the rumor mill, more HEVs are coming, including best-selling nameplates.

So, after we recently checked out the unofficial vision of a potentially upcoming 2024 Toyota 4Runner hybrid (sixth generation), now it is also the ripe time to witness the digital 2024 Toyota Tacoma’s hybrid introduction as the fourth iteration of the best-selling mid-size pickup truck. This fresh CGI also arrives courtesy of TopElectricSUV.com, and we can (again) almost bet our lunch-break pocket money on relying on lots of Toyota rumor mill whispers.

Among the interesting highlights, we can certainly count on the “full redesign arriving in the coming months” to be the juiciest one, along with the potential arrival of the next-gen Tacoma with the company’s new Hybrid Max powertrain. Naturally, the publication has illustrated the all-new mid-size pickup truck (which retained its sales crown in 2022 with 237k deliveries!) with lots of styling DNA taken from its bigger Tundra sibling.

Alas, the powertrain credentials will not be shared among them, as the latter’s 3.4-liter twin-turbo hybrid V6 with 437 electrified ponies would represent overkill even for the TNGA-F platform shared with the latest Land Cruiser. Instead, the informal ideas regarding the fresh Tacoma (with a rumored starting MSRP of around $33k for the hybrid version) revolve around Crown’s hybrid heart.

As a reminder, the S235 crossover sedan packs a Hybrid Max turbo 2.4-liter inline four aided by two electric motors for a total system output of 236 horsepower. Well, it remains to be seen how many of these opinions do pan out in the real world – and in the meantime, we recommend taking all this with the proverbial grain of salt until there’s some official word from Toyota on the Tacoma matters. 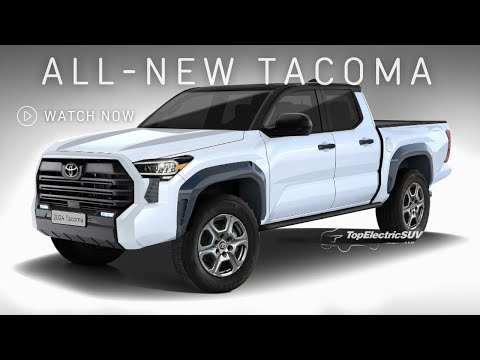