Back in the summer of 2018, electric cars make a triumphant run at the Pikes Peak Hill Climb. Volkswagen’s purpose-built ID.R clocked a time of 7:57:148 minutes on the world famous climb, setting the competition’s new all-time record. Will a Tesla manage to beat that?
21 photos

We’ll have to wait and see. A group that goes by the name Unplugged Performance announced in June that this year’s Pikes Peak would see a Tesla Model 3 take on the circuit's elevation and bends, with none other than 24 Hours of Daytona champion (twice) Randy Pobst behind the wheel.

The announcement was made by the driver himself in June (tweet attached below) but at that time Unplugged Performance says it didn’t even have the car in its possession. A month passed since, and in the meantime the group has both the car and the upgrades made to it for some serious racing.

This week, the group posted a video of a modified Model 3 racing on the Buttonwillow Raceway in California. It’s a close-to-two minutes clip showing the run that allegedly made this particular Model 3 “the world’s fastest time attack Tesla,” and the “fastest Tesla ever recorded.”

The EV managed a time of 1:53.27, making it faster than a Porsche 911 GT3 RS (991) and just a tad slower than the McLaren 675LT on the same circuit. The run was conducted on street tires, and the record run has been akcnowledged by specialized website Fastest Laps.

As you already guessed, this Model 3 is no ordinary Tesla, as it received the full scope of Unplugged modifications. That's $35,000 worth of changes wrapped in a package called Ascension-R. It includes new coilovers, sway bars, brakes, bucket seats, and harness, among others.

It’s not clear yet what modifications will be made to the car that will take on Pikes Peak. This year’s edition is (still) scheduled for August 30. 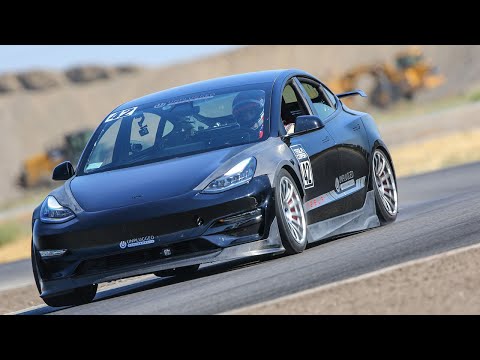