3 Ninja vs Demon: Flagship Dodge Challenger Gives Kawasaki ZX-14R a Reason to Get Worked Up

Wake any car enthusiast up in the middle of the night and ask them which is currently the quickest production car, and they will definitely point toward the Tesla Model S Plaid. So much has been made of the EV's unearthly ability to launch off the line and gain speed that the information is now well engraved in our brains, right next to our names and birth date.
13 photos

That's all peachy, but the downside to it is that whenever a Tesla Model S Plaid enters a drag race against other stock vehicles, it eliminates any suspense over the result. Surely, the electric sedan is going to lead the way from start to finish and look effortlessly while doing it, right?

Well, if you know a thing or two about how Tesla measures the car's acceleration, you also know it takes quite special conditions for those exact numbers to be met. A prepped surface is a must and so is a full battery, and that's before we even get into planet alignment and the like. The Plaid's saving grace, however, is that it has a bit of jiggle room: it doesn't need to be at its best to defeat pretty much any other series production car out there.

These guys sure did their best to test that, though. They brought an assortment of quick cars to test the might of the Model S Plaid against that includes names such as the Porsche 911 Turbo S (great, but easily beatable for the EV), the McLaren Senna (also great but a lot better racing on a track than in a straight line; again, no match for the Model S), and the Bugatti Chiron (the successor of the mighty Veyron and the one car that could maybe pose some problems).

The clip starts with the Tesla absolutely obliterating the 992 Turbo S despite giving it a head start as well as taking a weight handicap. After that, however, the Chiron jumps in and, to the surprise of everyone, beats the Plaid in the standing quarter. There's no more than a bumper in it, but it's the Chiron's bumper that's in front. The face of the Tesla driver says it all - like us, he just can't believe what's happening.

At this point, the rolling race makes no sense since it eliminates one of Tesla's main advantages - its launch - as well as introducing a huge disadvantage - its 163 mph (262 km/h) top speed limitation. With the rolling start, the chance of hitting the limiter, especially over the half-mile distance, is greatly enhanced. That's something the Chiron doesn't have to worry about thanks to its 261 mph (420 km/h) top speed.

The 911 Turbo S and the McLaren Senna feel like supporting cast in kind of setting and company, and they kind of are. However, it's not unheard of for the rest of the matches to be more entertaining than the main event. That's not the case here. However, it's through any fault of the McLaren Senna or the Porsche 911 Turbo S, but only because the Plaid versus Chiron confrontation is so good.

But the highlight has to be the plane showing up and doing a very low fly-over (and we do mean "very low". It couldn’t have been more than ten feet above the track) as the Chiron and Senna were about to take the stage. The stunt isn't meant to prove any points - except maybe that phone makers should disable the video feature in portrait mode - but, unless you plan on staring into the freezer, it's definitely the coolest thing you'll see all day. 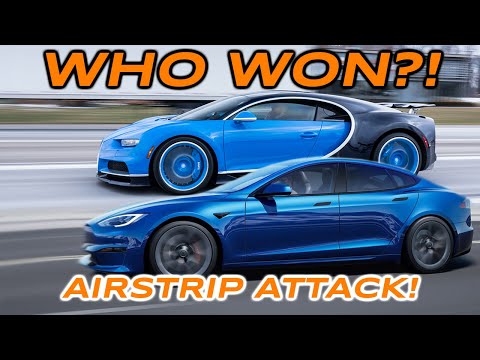