MIT’s Self-Driving Boat Is a Futuristic Robotaxi on Water, Ready to Operate in Amsterdam

Just as autonomous vehicles are making their way on public roads, robotic boats are seen as a viable alternative on water. The Massachusetts Institute of Technology (MIT) has just unveiled the full-scale advanced Roboat that demonstrated what it can do on the Amsterdam canals.
7 photos

MIT’s Computer Science and Artificial Intelligence Laboratory (CSAIL) and the Senseable City Laboratory have been working on this project since 2015, and several prototypes were launched over the past few years. Now, the final robotic boat is here: a two-seater black and grey vessel with improved capabilities.

According to MIT specialists, this water robotaxi boasts higher precision in perception, navigation, and control. Using multiple sensors and 360-degree-view cameras, it can understand its environment and avoid collision with various objects. With the help of GPS, it can even autonomously decide a safe route from point A to point B.

The Roboat’s innovative “latching mechanism” also enables it to connect to the docking station or to other boats, by detecting QR codes.

The autonomous vessel is also fully electric, equipped with a large battery, “the size of a small chest,” that allows ten hours of continuous operation. Another interesting feature of the Roboat is its universal hull, which means that various types of top decks can be adapted to a base that stays the same, thanks to a versatile design.

According to the project’s representatives, this self-driving ship could easily operate 100% autonomously, 24/7. Still, for safety reasons, it is being monitored by an onshore operator for now.


After unveiling the final version, the project’s next phase will be to start operating the autonomous ship on public routes in Amsterdam. Besides passenger transportation, the Roboat is also suitable for delivering goods or collecting waste. Furthermore, one operator could safely monitor up to 50 of these robotaxis, which would be beneficial both for the community and the environment. 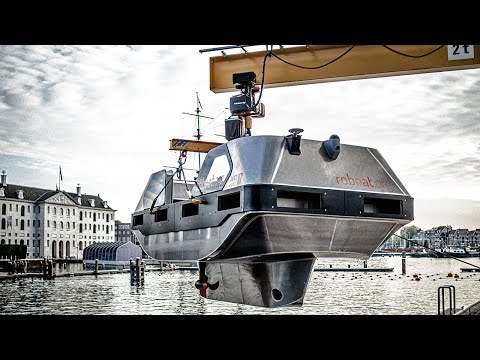