2 In a Historic First, an Autonomous Military Ship Fires Missile in Coordination With Drones

Tesla May Have Secured 10 GWh in LFP Cells From BYD

Nellie Bly has completed the world’s first 1,000+ nautical miles autonomous and remotely commanded journey of a commercial vessel at sea. It was an expedition that lasted 13 days and a great opportunity for Sea Machines to demonstrate its first-of-its-kind AI (artificial intelligence) – enabled autonomy system SM300.
10 photos

The autonomous voyage of the Nellie Bly totaled 1,027 miles and 96.9 percent of that distance was accomplished under fully autonomous control. 31 collision-avoidance and traffic separation maneuvers have been executed by the SM300, with the vessel averaging a speed of 7.9 knots. It was a journey that began and ended in Hamburg, Germany, with over a dozen ports being visited along the way, in both Germany and Denmark.

According to Michael Johnson, Sea Machines CEO, this autonomous voyage marks the catalyst for a new era of at-sea operations. These Danish waters have been transited by 100 million vessels over the last two millennia, and while ships, destinations, and cargos have changed over the years, the way they are operated has remained virtually constant. Humans have always been the ones in charge of making navigational decisions and controlling the vessels, which is why the Nellie Bly was different because it was remotely commanded.

Sea Machines named the vessel Nellie Bly in the honor of a famous journalist in the United States. She took a 25,000-mile journey around the world in 1889, inspired by Jules Verne’s book “Around the World in 80 Days.”

The autonomous voyage took place under a project called The Machine Odyssey, with Sea Machine’s SM300 autonomy system being at the helm of the vessel. A remote team located in Boston was also in charge of monitoring the ship.

Sea Machines is based in Boston and it develops autonomous command and control technology for marine navigation. Its SM300 system is AI-enabled, comes with long-range computer vision, features obstacle detection and collision avoidance. It integrates with the ship’s onboard equipment such as GPS, radar, AIS ENC charts, and specialized cameras that offer full awareness at sea. 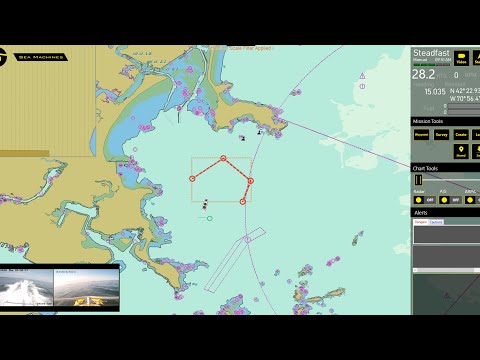