3 MGK Hangs Out the Window of Mod Sun’s G-Wagen, Smashes, Kicks Out Windshield

Yesterday, Mercedes-Benz gave us a deeper insight into how it plans to take its range of electric vehicles further, and it looks like the Germans are going to be pretty busy over the course of the next few years.
8 photos

Right now, the only active members of the EQ family are the EQC, the EQV, and the smart EQ, with the latter being somewhat of an intruder since it doesn't share the Mercedes-Benz name. We all know how well the EQC has been received (not very), and the EQV is such a niche model that it's pretty much irrelevant in the grand scheme of things. Meanwhile, the all-electric smart family makes a lot of sense in Europe's congested cities, yet its very limited range keeps it from fulfilling its potential.

That means a lot is hanging on the shoulders of the upcoming EQ models. However, there's one thing that shows just how confident Mercedes-Benz is in its all-new platform (EVA) developed exclusively for its electric range: the fact the next member of the EQ family is going to be arguably the most important as well.

The EQS may not end up as the best-seller of the range, but it will hold that halo status its equivalent model also enjoys among the fossil-fuel burners, and you can cram all the comfort and technology you want in a car, but if it won't be up to par in terms of performance and, even more importantly, maximum range, it will all be for nothing.

According to Mercedes-Benz, that shouldn't be a problem. The German manufacturer claims the EVA-based EQS will be good for over 435 miles (700 km) under the European WLTP cycle, a figure that was very impressive at the time it was first flaunted about, but has since been overshadowed by both the Lucid Air and the Tesla Model S Plaid (which supposedly do over 500 miles).

Either of those two, however, is going to have a hard time competing against the luxury levels usually provided by Mercedes-Benz, not to mention the sheer weight of the German brand's name in the segment. If Mercedes can nail the technical aspects, then there's no doubt it'll be on to a winner.

To make things even more appealing to the public, Mercedes isn't only developing an all-electric limousine, but also an SUV version - called EQS SUV, for now. Just like its companions, the high-riding vehicle is still wearing a full camouflage wrap so it's hard to make out any details, but it's obvious it shares the same forward cab design enabled by the EV architecture.

Expect the EQS SUV to offer the same amount of interior space as a much larger vehicle using a conventional engine, which translates into similar comfort with a smaller footprint. The SUV should share its powertrain and battery pack with the limousine, but so far, we don't know exactly what hides under the bodywork of either of them.

The EQS is expected to have a 110 kWh battery pack and a dual-motor setup with a combined output in the region of 500 hp. Given the brand's focus on comfort and serenity, we think that should be plenty. Sadly, the video below doesn't give us any insight into the new models' performance levels, but it does seem to suggest that all the vehicles in the convoy are more or less in the same stage of their development. Will we see them launch all at once? No, but it does mean everything is on track for Mercedes-Benz, which is always good news. 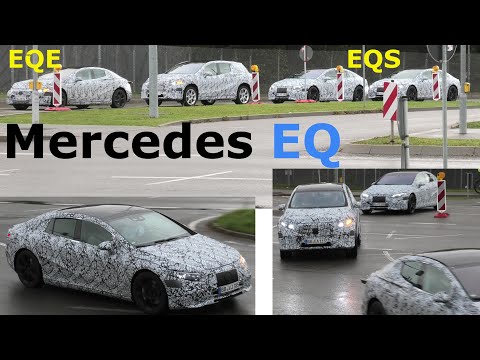