1 The Boulder 2.5 Tiny House Is a Small, Near-Perfect Mobile Office

3 The 1913 Earl Travel Trailer, the Oldest Trailer in the World, Is Still Around and Awesome

5 1961 Holiday House Geographic Model X Was the Trailer for the Rich, a Futuristic Unicorn
Coverstory

Elena Gorgan
Driving a vintage Volkswagen Beetle is almost guaranteed to get attention and smiles, and become a conversation starter with people of all ages and backgrounds. The same goes for this absolutely adorable but still very competent conversion – but with plenty more giggles.
13 photos

This is the Super Bugger, perhaps one of the most unfortunately-named vehicles of all times. It’s a conversion of a Volkswagen Beetle, or the Bug, and it’s immediately recognizable as one due to the front end, which also happens to be the only body part from the donor car that’s still in place. The Super Bugger is, put simply, a Beetle that’s also an RV, so it can still serve as a daily driver and offer several overnight stays to a couple of non-fussy adults.

The Super Bugger has been around since the early 1970s, and it’s perhaps one of the most quirky conversions done to classic Volkswagens. The original Super Bugger hails from Costa Mesa, California, where a company offered turnkey conversions or kits for DIY builds. That said, once word of it got out, conversions flourished all the way through the ‘80s, and have been known under a variety of names, including Bugaroo, Lil’ Bugger and MiniHome.

The original Super Bugger retailed for $6,000 and it is believed only some 1,000 units were produced. Of those, some still survive to this day, including the two units shown in the photo gallery above – and the three in the videos at the bottom of the page. These three are among a handful of Super Buggers left in such mint condition and that are still on the road today. One is the Super Bugger shown on the cover of the 1977 Mechanix Illustrated (sold through Mecum in 2021 for a hair under $20,000), and two are located in Canada.

The idea for the Super Bugger was very simple but paradoxically difficult to put into practice: how do you turn a small car into a motorhome without it losing its functionality as a daily driver? In this particular case, the answer implied cutting off most of the body of the car except for the front end, reinforcing the chassis, and adding a fiberglass and wood kit that would turn it into a mini-home with wheels.

The interior of this adorable RV is very small but, somehow, still cozy. You get two bucket seats for the driver and the passenger, and a dining nook in the rear, with two benches and a small table. In front of the rear window is the kitchen area, with just a gas two-burner cooker and a small sink; cabinetry and a small wardrobe surrounds the kitchen from three sides.

Inside, the cooking area is only accessible if you sit at the table and reach out, but you can use it from the outside as well. If you lower the table and connect the two benches, you get a small bed that can sleep two adults – as long as they don’t mind cuddling and / or sleeping with someone’s elbow in the eye.

Features also include a crank-handle skylight for ventilation, the standard engine in the rear, and some additional storage for camping gear in the front. According to the original brochure, the kit adds just 250 pounds (113 kg) to the weight of the vehicle, and it could still hit highway speeds depending on the engine. The three units mentioned above, though, usually travel at 55 mph (88 kph) and get 25 miles per gallon (10.6 km per liter).

The red Super Bugger, owned by Sandra Paeseler and driven by her husband Bill Furlong on family trips and at Bug and caravan gatherings, is an impressive 10-year restoration project that cost Sandra, who inherited the RV from her dad, over $40,000. Considering that only few such Super Buggers exist today, and especially imagining the kind of giggles and attention it’s getting, we’d say it was money well spent. 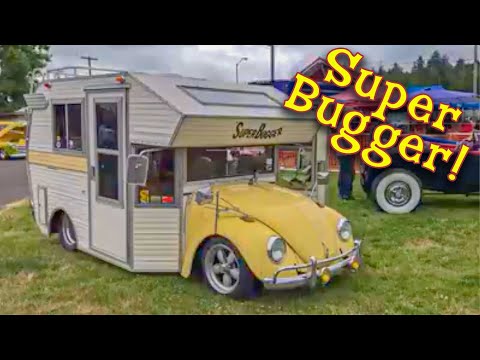 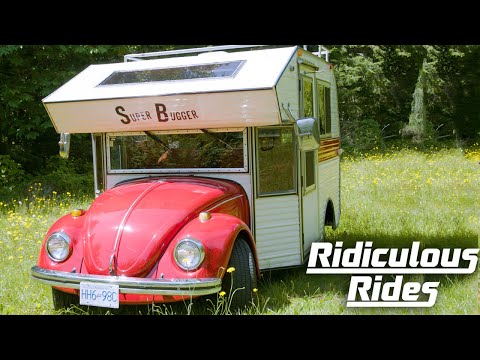 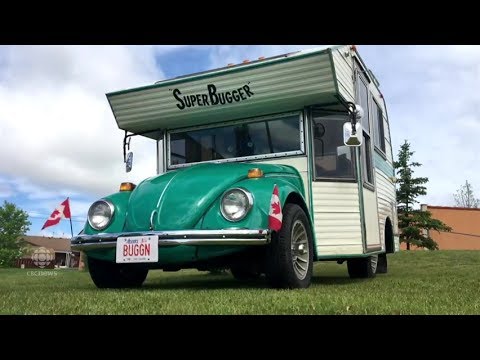