4 Manny Khoshbin Admits His McLaren Speedtail Is a Monster, but It's Also Too Quiet

“Not Safe to Drive” 2006 Bugatti Veyron Fails to Sell, Despite Manny Khoshbin Association

Much like video killed the radio star, negative buzz killed Manny Khoshbin’s sale of his two-tone 2006 Bugatti Veyron, despite his best efforts.
23 photos

In the world of car collectors, the name of Manny Khoshbin rings a familiar bell: he is a passionate collector with a soft spot for Bugattis, and he is also a very popular YouTuber. Part of his appeal comes from the fact that he comes across as relatable despite his wealth, and that he takes joy in driving his many cars – a joy he then spreads along, through his videos.

Given his reputation as Bugatti’s biggest fan, confirmed by his owning a handful of Bugatti one-offs, you’d think any Bugatti he tries to sell would move incredibly fast. Not so where his 2006 non-custom Veyron was concerned, which he listed on Bring A Trailer last week. This was the 41st Veyron produced worldwide and the 12th of those built for the U.S. market, and Manny believes that it’s also the only one in this particular color combination.

Manny is the second owner, having driven it just 200 miles (322 km), and he listed it with the complete list of documentation including repairs and maintenance checks. This was where everything went south, as one of these documents mentioned a leaking radiator, a non-functional rear wing, and the fact that the car was “not safe to drive.” As soon as commenters on the platform pointed this out, the auction derailed and, on closing, bidding had long stopped at $1 million. The reserve was not met.

On the final day of the auction, Manny tried to save face but speaking “the truth” about the Veyron on his YouTube channel (see the video below). As he put it, he had no idea that the document said the car was not safe to drive since he continued driving it after the check. He did not see any radiator leak and had no idea that the rear wing didn’t work. He also said that he would replace the radiator and pay for it, and proved that the wing worked just fine.

However, because BaT would not let him edit the listing after posting it, he was left with no other choice but to offer this explanation on video. He also took the Veyron out for a drive, for the skeptics to see that everything was fine with it. He would not risk his life in a car that was not safe for the road, he stressed.

In the end, Manny’s best efforts failed in the face of a constant barrage of criticism and negativity. The Veyron stays put in his garage, for the time being. 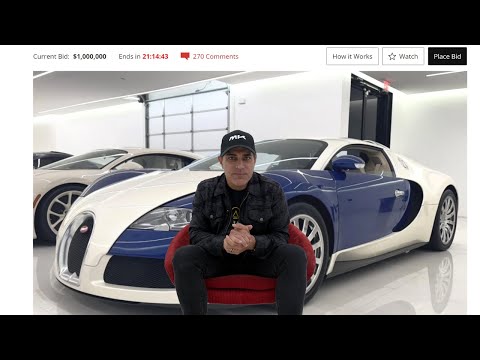