As much as I like the purity of the first-generation Corvette, the split-window design for the 1963 model year has no equal. Originally priced at $4,037 or a little over $36,000 at current exchange rates, the fixed-head coupe featured a burly small-block V8 with up to 360 horsepower on tap.
18 photos

The ‘Vette offered by RK Motors Charlotte is a little more potent and expensive, but it’s worth every cent once you take in every single detail of the car. Listed for a jaw-dropping $424,900 at the time of writing, the Jeff Hayes-built restomod is packing a 495-horsepower LS376/480.

Rated at 473 pound-feet (641 Nm), the wet-sump LS3 is an idea torquier than the dry-sump LT2 of the current Chevrolet Corvette Stingray. Fuel injection from Top Street Performance, a fabricated intake, L92 rectangular-port heads, a nodular crankshaft, powdered connecting rods, hypereutectic pistons, a polished compressor for the air conditioning, and a Wildwood master brake cylinder pretty much sum up the engine bay of this old-timer.

A four-speed automatic transmission, namely the Turbo-replacing 4L70-E, sends the goodies to a Dana 44 rear differential sourced from a sixth-generation Corvette. Now sitting on a Coffman Corvette chassis with fifth-generation front suspension, the one-off build further sweetens the deal with six- and four-piston brake calipers as well as drilled-and-slotted brake discs.

Although chromed wheels don’t work too well in this retro-modern application, the Toyo Proxes 4 Plus redlines are perfect for spirited driving. The rubber measures 235/40 by 18 inches up front and 275/35 by 19 inches out back, representing a far cry from the original tires (205/75 by 15 inches).

Refinished in Platinum Metallic, the pro-tourer sings the song of its people through a side-pipe exhaust system. The interior is dressed to impress with French-stitched bucket seats, AutoMeter American Muscle telemetry, Vintage Air climate control, and a shortie shifter from Lokar. A Billet Specialties Boost steering wheel, billet foot pedals, a polished column, and LED accent lighting round off this modern interpretation of the split-window ‘Vette. 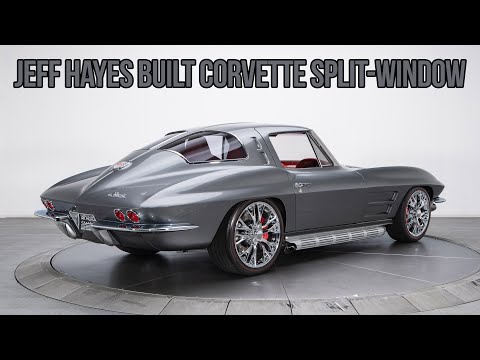