3 Dot Is an Old Ferry That Became a Gorgeous, Floating Palatial Home

5 This $30 Million Floating Villa Is an Endless Holiday, Wherever You Want It
Car video reviews:
Up Next

The strange developments of 2020, still in full swing in 2021, forced us to reconsider most aspects our lives and especially how we interact with each other. A new project invites New Yorkers and tourists to do that safely, in the great (but man-made) outdoors: Little Island.

Little Island is just that, a small man-made island on the Hudson River, where once Pier 54 stood. It is a floating park built by the The Diller-von Furstenberg Family Foundation and, because of it, nicknamed Diller Island. As of May 21 this year, it is officially open to the public.

In the past, we’ve spoken about marine real estate and how industry analysts believe it’s the future. After all, cities are getting too crowded and there’s only so few places on land one can go to to get privacy (*sarcasm), so various companies are looking at the possibility of taking the world’s richest out to sea—to live there.

Whereas floating cities remain just a concept for the time being (though you can reserve an apartment in one, just in case you’re wondering), here is a piece of similar real estate that’s as real as it gets: the floating park that is Little Island. Plans for it were officially announced seven years ago, and the total cost of the project was $260 million, not including the maintenance for the next 20 years the Foundation has promised to cover.

In return, New Yorkers and visitors to the “City that Never Sleeps” get the chance to reconnect with nature and the arts and socialize in an open space. The motivation behind the project was to reactivate Pier 54 after Hurricane Sandy but to do it in a way that would not damage aquatic life. So the old wood piles were left in there, and 280 concrete ones were brought in. On top of them sit 132 concrete “tulips” (perhaps the strangest phrase you’ll read today), each holding something: trees, soil, lawn, overlooks.

Each “tulip” is different in size and holding capacity, and all of them make up the 2.7 acres (1.1 hectares) of the park. It includes winding alleys, lawns you can sit on to take in the sun or watch the sunset, an amphitheater, a play and arts area for children, an area for serving food and beverages, and various spots to take in the surrounding views.

Little Island was designed by UK-based Heatherwick Studio and the New York-based landscape architecture firm MNLA, led by Signe Nielsen, as an oasis in the bustling city. Its shape is inspired by a floating leaf, and its stated goal is admirable. “What was in my mind was to build something for the people of New York and for anyone who visits,” Diller said, “a space that on first sight was dazzling, and upon use made people happy.”

The park is filled with trees and flowers (114 trees and more than 66,000 bulbs were planted), but that’s not all it aims to offer. Parents can bring their children to play or try their hands at crafts. Couples can go out on romantic dates, including dinners and a walk. Art lovers will find the art community here has a very strong presence, with plans announced for plays, live concerts, and readings every night.

Perhaps the best part of all is that, despite the massive price tag and the presumably high costs and running such a park, everything (but the food and drinks) is free of charge. Little Island says that ticketed events will be held every once in a while, but when that happens, prices will either be low or discounted to maximize attendance. Educational and art programming will be offered six days a week.

The park is open to visitors every day from 6 a.m. to 1 a.m., but timed reservations are mandatory between 12 p.m. and 8 p.m. to regulate traffic. Needless to say, since it just opened, Little Island is incredibly crowded these days. 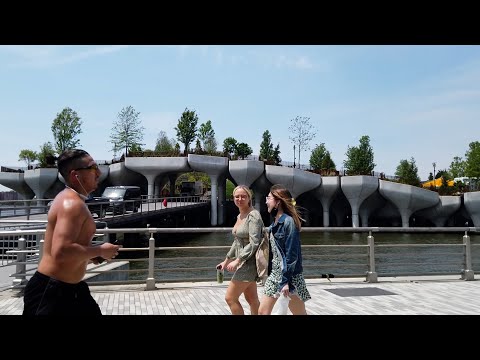