2 The Mountain Tiny Home Is Minuscule, Has Glass Roof and Skylight Shower

4 Hi Sea Floating Home Is Its Own Island, Takes Your Breath Away

5 “Currents for Currents” Floating Houses by Dada Design Are a Sign of the Future
Car video reviews:
Coverstory

The perfect family home or the perfect weekend retreat for the family doesn’t have to be on solid ground. For one British-born Hong Kong resident, it was Dot, an old ferry he had converted into a floating palatial residence.

Dot Is an Old Ferry That Became a Gorgeous, Floating Palatial Home

And Dot is now for sale through brokerage/charter company Ocean Independence.

Dot isn’t the only ferry conversion in the world, and it’s definitely not the only floating home to have made headlines recently. But it stands out for the solid build, a distinct personality, and the promise of being nearly self-sufficient, which gives the future owner the chance to really “get away from it all” for a few days, in the company of friends or family.

Build in 1988 by the Wang Tak Engineering & Shipbuilding Co., Dot was once the flagship vessel in Hong Kong’s Star Ferry fleet and went by the name Golden Star. Measuring 47 meters (154 feet), it was massive and reliable, wide and long, and most importantly, sturdy. All these were qualities that attracted its first private owner when it went on sale in 2011, as he tells The Robb Report under the condition of anonymity.

As a child, he used to take trips on Golden Star very frequently, and the idea of turning the ferry into his vacation home seemed like a dream come true. At the same time, he wanted to keep part of that history alive, so whatever modifications would be made had to be made with this in mind. A home designer was flown in from France and, through the course of 18 long months, Golden Star became Dot.

“I have an obsession with old-brick industrial buildings, like those large go-downs, mills and factories built between 1870 and 1905 in the US, Britain, and Germany,” he says. “My home in London has beds built from factory workstations, a weaver’s block and a book press. We have the oldest wallpaper in London from the 18th century, which is little more than rusty pegs and torn remains, but there is great beauty in age and ruin.”

Much of the old ferry is still noticeable in Dot, from the cavernous interiors to the exterior and even pieces that have been incorporated into finishes. Dot has 557 square meters (6,000 square feet) of living space and an additional 372 square meters (4,000 square feet) of storage. While it might not look too different from a regular ferry from afar, inside, it’s a luxurious, very elegant home.

Dot has 170 square meters (1,830 square feet) of flexible solar panels, which, on sunny days, provide nearly 75% of the energy needed to run everything on board, including the 30 AC units overnight. There’s a 56,781-liter (15,000-gallon) container for water storage, rainwater collection system, and filtration system for the conversion of seawater. However, the owner says Dot uses rainwater for 90% of the year.

Described as “the best priced largest floating real estate for sale in Hong Kong,” Dot travels at a top speed of 9 knots and a cruising speed of 7 knots. It comes with one AB Semi Rigid inflatable with 8 hp Mercury outboard engine, and three spare hp outboard engines, and mooring in Hong Kong’s Tai Tam Bay included in the asking price.

Since we’re on the topic, the asking price for Dot is €2,272,100 ($2.7 million). The owner says that Dot has been perfect for him and his family to build incredible, ever-lasting memories on board, so they’re ready to offer someone else the same opportunity. 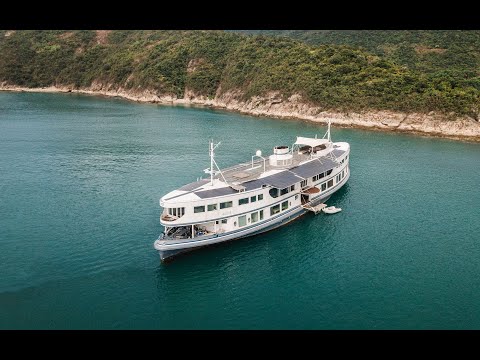