2 Maritimo M60 Flybridge Yacht Is All About Chilling at Anchor, Away From Land

3 This Luxury Hybrid Yacht Can Be Sailed by One Person, Is Totally Self-Sufficient

5 Cloud 9 Superyacht Is a $69 Million Floating Paradise With Incredible Luxuries
Car video reviews:
Up Next

Powerboats these days promise a lot of things, but there’s one thing they can’t do – and that is to replicate a successful past. If you want a real champion boat, you need to go looking for one among the “veterans”. The 1984 Apache Warpath is a slice of history, with unbeatable performance and prestige.
21 photos

Among the luxury vehicles selling on DuPont Registry, the Apache Warpath stands out not just because it’s a boat, but because it’s a historic masterpiece that’s definitely worth collecting. This eye-catching powerboat is the one that conquered the Offshore Power Boat World Championship in 1984, securing a place in history for both itself and Bob Saccenti.

In the mid-1960s, Bob Saccenti was an auto mechanic in New York, who decided to move to North Miami Beach and learn as much as he could about boats. For almost two decades, he worked as a mechanic at Hawk Marine Motors. Then, in 1980, he joined Ben Kramer at Apache Power Boats, which would be a turning point in his career. Four years later, at the World Championship, Saccenti, Kramer and navigator Tom Evans, of Team Apache Racing, became winners.

Decades later, what could be considered “the most significant off-shore racing boat in history” is headed to auction. The 41-foot (12.4 meters) racing boat was completely restored between 2007 and 2009, under the supervision of Tom Evans (crew chief) and Gail Paik (original artist). The Kevlar deep-V hull was still in remarkable condition, but the steering components, throttles and mechanical features were in need of restoration.

The Warpath’s twin supercharged 572ci Chevrolet big-block V8 engines were rebuilt, and they can still make the racing boat fly at 1,000 HP. The striking graphics of the Apache, which are sure to attract everyone, were also restored.

This original Apache Warpath – hull #001 comes with a Certificate of authenticity from Bob Saccenti, the legendary builder and racer. The week-long online auction begins today. 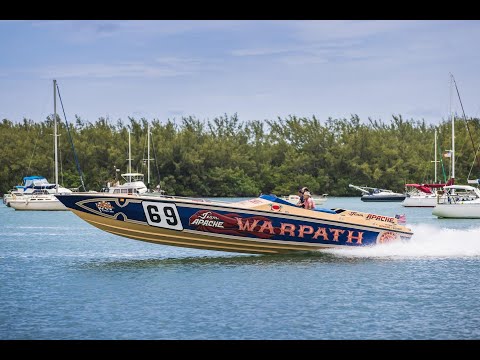