2 55 Years of Hot Wheels Corvettes: Part 1 of the Fifth Era

4 New Hot Wheels Set of Five Cars Will Make You Feel Like a Kid Again, Zoinks!

5 55 Years of Hot Wheels Corvettes: the Blooming 2000s Part Two
Up Next

Dragos Chitulescu
I've spent a lot of time looking at videos of Corvettes this month, given our current theme. I used to be a big fan of ZR1s already, but now I'm certain that I'd love to drive some of the older ones as well. Until I get the chance to do that, I'm stuck with enjoying the 1/64th scale models. And I was happy to see a red C7 Z06 convertible in a store the other day. Naturally, it's now part of my growing collection.
48 photos

And it seems like every day Mattel is coming up with new designs for collectors of all ages. We've just recently seen the Warner Bros. set of five cars, and now someone has managed to get a hold of the D case for 2023. As usual, we won't be talking about the fantasy cars inside or the ones that have been in a previous case.

But we will say this: it's awesome to see the Rimac Nevera, Pagani Zonda R, Greenwood Corvette, 787B, and RX-7 FC back for one more round. This way everyone can get in on the action, and it's less likely that their market value will go beyond a level that's acceptable for most.

We've known for about a month now that the Lotus Evija is the new Super Treasure Hunt for Case D, and there are already plenty of them up for sale on eBay. Loose versions will cost you less than $30, but the carded ones might set you back as much as $130.

It's somewhat crazy to think that Mattel has opted to turn this model into an STH for its second appearance in the Mainline series. The first edition featured a British Racing Green paint job and used those horrid TRAP5 wheels. The new Atomic Red version has got the same pair of shoes, but the casting looks amazing with the Real Riders 10-spoke rims.

The Treasure Hunt model is a strange one yet again. After the BMW R nineT Racer and the Surf Crate, the new TH is the Mad Propz airplane. This casting has been around since 2004, and it might be successful with kids or completionist collectors. But we can only hope that the next TH items will be more like the Mustang Funny Car or the Subaru Impreza we've seen in previous cases.

One of the first items to come out of Case D is the 1982 Cadillac Seville. This casting was last used for the Gucci Exclusive collaboration back in 2021. But if you can't recall seeing it in stores, that's because Hot Wheels hasn't used it since 2012. But that version was a retool of an existing design, one which was last sold in 1987. So this is a pretty nice touch for the new case.

Albeit a fantasy car, some collectors might be excited to see the second iteration of Max Steel- this time in white and red. The Matte Blue seemed like a better match for this casting. But opinions are bound to be split on the topic.

The Lucid Air is back for the third time, this time featuring a Metalflake Champagne paint job. EV fans will also be happy to see the Ford Mustang Mach-E 1400 again. This is the fourth version of the casting, but the first edition is probably the coolest one yet as it's faithful to the original design.

The new Gold paint job on the McLaren Elva almost makes it look like an STH, at least if you manage to ignore Mattel's choice of wheels for it. The '08 Ford Focus feels like a rather obscure model, as it has only had five variations in the past 10 years.

Given the colors it uses, you could almost overlook it thinking it's a fantasy car. One of the most anticipated castings for 2023 is up next. We've seen a prototype of the BMW 507 a while ago, and it's great to see it as part of the Mainline series at last. A Premium version of the convertible is probably being developed as we speak. And people are bound to be all over it as soon as it arrives.

JDM fans, scalpers, and Nissan enthusiasts alike will be thrilled to see the new livery for the R32 GT-R. You can see a depiction of Godzilla on the side of the car, using his special powers. This casting was used in 2022 as a Legends Tour Special Edition item, but there are other more exclusive variations of it out there.

Someone is even asking as much as $1,500 for a version that came out in 2003. Skipping over the Gulf-Oil Aston Martin Vantage GTE and the red Honda Civic EF, we are excited to see the '84 Corvette. Seeing that Chevrolet will be celebrating the icon's 70th anniversary next year, there's bound to be an influx of Hot Wheels 'Vettes coming our way. And we've seen sneak peeks of nine of them so far. 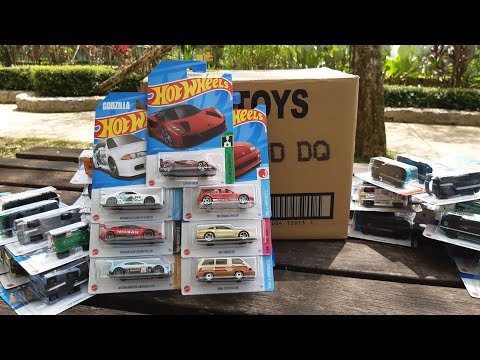