1 Matching Porsche 911 GT3 RS, Lambo Huracan Are the Ultimate Toys for the (Not) Crazy Rich

3 Inside the 2022 Hot Wheels Case J, Watch Out for the Ford Mustang Super Treasure Hunt

5 Hot Wheels: World Race is an Underappreciated Classic You Should Watch, Here's Why
Car video reviews:
Up Next

R35 GT-R Fires up 4-Rotor Engine, Is Ready to Drift

Realizing you have an addiction is the first step toward controlling it. I realized I cannot stay away from Hot Wheels cars a few years ago when I ended up spending an entire month's salary on 1/64 diecast cars. Ever since, I've been very careful with the models I buy, especially the quantity I buy them in. But I'm still at the point where I will always look for a new Hot Wheels car when I'm out shopping.

Yesterday I got my hands on a cool 1971 Porsche 911, in yellow. My girlfriend's reaction was immediate: "I just hope this is going to be your only addiction ever, I can deal with it". But it's a rather fun problem to have, especially if you don't allow it to escalate.

Because day in and day out, you get to see all the new models released by Mattel, and you can start planning your future 1/64 scale hunting sessions. And it's also exciting to see the different themes and ideas that Hot Wheels has delivered.

Take the Hot Wheels: Stars & Stripes series, a set for the real American patriots out there. This isn't the first time we get to see diecast cars with liveries that are reminiscent of the Star-Spangled Banner. The first Stars & Stripes set came out in 2016, and two more followed in 2018 and 2020.

But if you'll do some more digging, you'll find that the idea goes back to 2002, when a set of 4 such vehicles was released. For the previous 3 sets, collectors managed to get their hands on 10 cars, including vehicles built by Ford, Chevrolet, Pontiac, and Dodge among others.

But for the 2022 edition, you'll have to settle for a total of just 8 items, one of which happens to be a fantasy car. The Muscle Speeder has been around since 2016, and it doesn't look half-bad sporting the red, white, and blue colors. But let's have a look at the more interesting vehicles in this set.

The 1965 Ford Ranchero is the first one, and this cast is now up to its 19th iteration since its original launch in 2011. And, judging by the hood details, you could envision the hypothetical Windsor V8 hiding underneath.

The 1967 Pontiac GTO is up next, and this might just be the coolest car of the set, at least if you overlook the excess gold plating on the front part of it. This is one of Mattel's older castings, as it has been around since 1997!

The 1971 Dodge Challenger is featured here in Metalflake Navy Blue with a red interior, but you'll quickly forget about it once you get a hold of the 1984 Corvette! This is a retooled version of the 1980 Corvette, which was initially available between 1983 to 1989 and then from 1990 to 2016.

Judging by this set alone you could say that 1984 was a pretty good year, as we get a replica of the Pontiac Firebird too. This vehicle is also a retool of an older Hot Wheels diecast and was launched back in 2020. If you're hoping to see some newer cars in the set, you're in luck.

Although it would have been nice to see a Dodge Demon in there too, we'll have to settle for the 2018 Ford Mustang GT instead. Last but not least, a Custom 1956 Ford Truck feels like the perfect way to wrap up a collection of diecast cars that are representative of the USA. And if you're anxious to get your hands on the Stars & Stripes set, you can get it here. 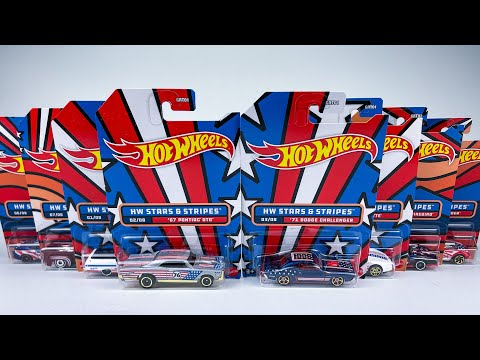