3 Honda Civic EF Goes From JDM Hatchback to Sedan, You Won’t See It on Any Road

5 2021 Hot Wheels Super Treasure Hunts Get Released, Which One Is Your Favorite?
Up Next

Inside the 2022 Hot Wheels Deutschland Design Set, a Perfect Gift for Diecast Enthusiasts

Dragos Chitulescu
Sometimes it can be difficult to get the right present for your significant other. But if you're dating a car guy or girl, you can't go wrong with a Car Culture set. Built to a superior standard than the classic Mainline models, these little 1/64 scale cars are bound to leave a lasting impression. After releasing the "American Scene" Car Culture set earlier this year, Mattel is bringing something new to the table.
16 photos

It has been almost 2 months now since we saw the previous set of Hot Wheels "Real Riders" vehicles, and everyone has been anxious for the second set to arrive. The 5 cars included in the first set were the Chevrolet Corvette C8.R, the 1969 Chevelle SS 396, the Ford Bronco R, the 2020 Dodge Charger Hellcat, and the Tesla Roadster. The "Chase" model, a version of a casting produced in a limited run, was the C8.R in black. But it's time to cross the Atlantic and take a look at what the European market has to offer.

This new Deutschland Design is also made up of 5 models, not counting the 2012 Mercedes-Benz Chase vehicle. The olive green Mercedes-Benz Sprinter van is a cool addition to this set, especially considering that this casting was just launched last year. The way this looks is reminiscent of the vans used for Icelandic tours. The Audi S4 Quattro is also back for its second appearance after being featured in the 2021 Deutschland Design set. Which one do you like more: the old Metalflake Blue or the new Yellow version?

The Porsche 911 GT3 RS has been around for a few years now, but the new model looks fabulous in Sky Blue. This is the 17th iteration of this casting, and it has been part of special sets before. Going back to the 2021 Mercedes-Benz C63 AMG Coupe Black Series - this is a new vehicle for Mattel. While the Chase version was finished in Glossy Black, the regular model is presented in Fire Opal.

As special as this car is, it still doesn't come close to the 1994 AMG-Mercedes C-Class DTM Touring Car, which is most likely going to be the star of this set. If you're eager to get your hands on the Deutschland Design cars, you'll need to spend about $55 for all six of them, including the Chase model. Of course, any collector will probably tell you that you should get at least two sets! 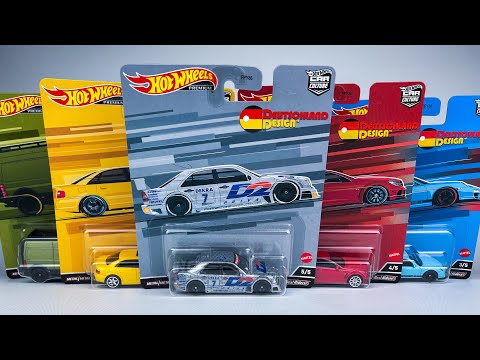