5 1970 Pontiac Trans Am Custom Car Gets Immortalized as a Hot Wheels Toy
Car video reviews:
Up Next

On Board Tycoon Shahid Khan’s Kismet, the $200 Million Entertainment Superyacht

Collecting Hot Wheels cars is more than just having a display of miniature vehicles you like. Hunting for your favorite models is a big part of the game! I know people that constantly browse through all the existing Hot Wheels stores in their cities in hopes of finding those rare Super Treasure Hunt casts.
31 photos

If you join a group of Hot Wheels enthusiasts, be it on Facebook, Reddit, or anywhere else on the Internet, you are going to be surprised at how serious this hobby is for some people. Frequent posts and threads include photos of what they've bought that day, what Treasure Hunt or Super Treasure Hunt they've come across, and so on so forth. It is common courtesy among collectors that they signal the moment a store brings out the most recent case of diecast vehicles.

The early bird gets the worm. If you're the first man to walk into a store after they've just opened up a fresh batch of Hot Wheels, you have a bigger chance of finding those special items you were hoping to get. The 2022 B Case is the hottest topic when it comes to Hot Wheels Mainlines - the most common diecast models on offer from this company right now.

It has been about a month since we've shown you how the first case of 2022 looks like. And we were stoked to see the Porsche 935 and the LB-Silhouette Works Nissan GT-R. But I guess everyone was eager to see the 1970 Pontiac Firebird. You know, the one that won the Hot Wheels Legends Tour. That's the same Firebird that raced the time attack BMW E36 in the "This vs That" series from Hoonigan.

And it's finally here. If you're going to buy the whole 2022 B case, you're going to have two of these miniature Firebirds. I can't imagine how excited the man who built and owns this car must be to have his car represented at this scale. But there are more reasons to be excited about the B case. We're getting another McLaren F1 GTR! This cast has been around for a little over a decade now, but it never fails to impress.

The Treasure Hunt cast for this case is going to be a fictional Fast Food van called "Quick Bite." If you come across it and don't like it, I'd still suggest you buy it and use it for trading purposes. If you're a big truck fan, you're going to like the 2020 Ram 1500 Rebel, which is still a fairly new cast for collectors. But it's not as new as the 1987 Ford Sierra Cosworth: this is the first time Hot Wheels collectors can get this car!

The Tesla Cybetruck is also back for this case, and you haven't found one so far, don't lose hope! Several casts are making a comeback as recolors, such as the Toyota Corolla AE86, the Honda City Turbo II, the Mazda Repu, or the Ford Focus RS. But there's no doubt that the highlight of the B Case is the Super Treasure Hunt cast: a 1973 BMW 3.0 CSL Race Car! These are already selling for over $70 on eBay if you want one that hasn't been opened yet! 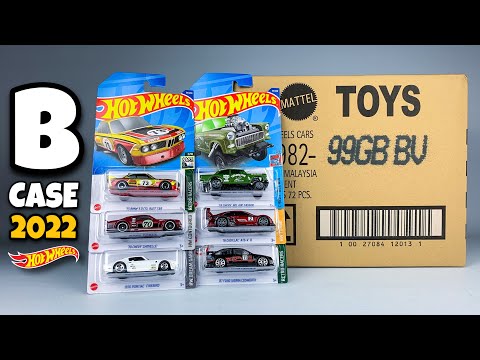 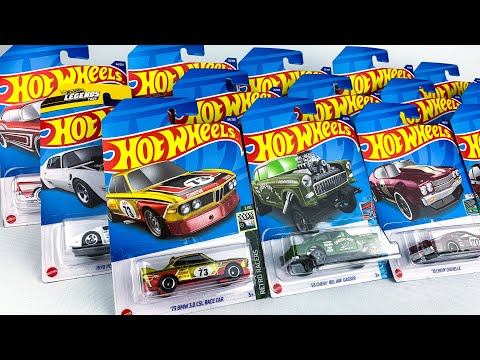