3 I Have Been Addicted for 30 Years, And I Just Can't Stop

Bombshell: 2022 Subaru WRX Sportwagon Confirmed for Australia, No Word on the U.S.

Curing addiction is not an easy thing to do. Especially if it's the kind of soft addiction, that isn't harmful to your life. Sure, spending hundreds of dollars on diecast vehicles may look like a bad thing if you're not a collector yourself. But it can also be perceived as an investment for the future.

From my experience, Hot Wheels diecast vehicles will rarely, if ever, lose their value. Of course, that doesn't quite apply if you release them from their "plastic jail" and they suffer some form of damage. Keeping them in their blister is not as fun as setting them free, I'll give you that. But it can be a good way of preserving their value.Collectors Are Happy People
If you've got a special cast on your hands, you might even sell it for a profit in a few years. And the explanation for that is quite simple. Every year, more people get on the Hot Wheels bandwagon. And every year, Hot Wheels releases new models. So, if you just started collecting in 2021, you've got a lot of catching up to do. Getting in the game just for the profit is going to be difficult though.

Imagine getting your hands on a Super Treasure Hunt diecast. An STH is hard to come by if you're just browsing through the stores. I've just recently managed to find my first one ever, and I've been in and out of the game for 10 years now. When you do find one, it can be tempting to sell it for up to 50 times what you paid for it. But then you think of how much it might be worth in 10 years from now.

Anyway, regardless of your reasons for joining the community, at one point you'll get tired of buying mainlines. Those are the standard 1/64 scale cars, easy to come by at almost any store. But Hot Wheels have thought of the older collectors too. Those that have higher standards when it comes to picking out diecast models also have a choice. Enter the "Car Culture" series.Boys Never Really Grow Up
The vehicles included here are made of higher quality materials, but they also cost more. Over the past few years, the "Car Culture" series included sub-series "Japan Historics", "Euro Style", "Race Day" and "Modern Classics". Today, we're at part 3 of the "Modern Classics" series. The first one included a '92 BMW M3, an '85 Honda CR-X, a Porsche 964, a Renault 5 Turbo, and a Mercedes-Benz 190E 2.5-16 Evo II.

2020 marked the appearance of "Modern Classics 2". This would bring the second-ever Hot Wheels Honda Civic EG and the first-ever '72 Mercedes-Benz 280 SEL 4.5. A '98 Subaru Impreza 22B STI was also included in the set, alongside a Nissan Silvia S14 and a Volkswagen Jetta MK3. And now collectors have their chance to buy the new "Modern Classics 3" set. People have been waiting for this for a while now.

One of the biggest assets of this set is the new 2000 Mitsubishi Lancer Evolution VI. Finished in Metalflake Blue, this is the first time an Evo VI is released by Hot Wheels. And they've done a great job at designing it. This is, without doubt, one of the best castings they've showcased in 2021, and a Mainline version will probably make its way onto the market next year.I'll Take a One Way Ticket Back to the '90s Please!
But the Evo VI is not the only Mitsubishi on the list. The 3000GT VR-4 is also a first-time appearance in the company's line-up, and its Monza Red finish is reminiscent of last year's Jetta MK3. The other three cars in the set are new iterations of Hot Wheels products we've seen before, and the BMW M3 is probably the nicest one out of the bunch.

But I'm sure that some people will love the Prelude and the 300ZX as well. Looking at the line-up presented in this set, they might as well have named it "Iconic Vehicles". After all, the E30 M3 is still to this day one of the most revered M vehicles ever produced. The Lancer Evo VI has a similar status among Mitsubishi fans. The 3000GT was made to compete with cars like the Toyota Supra and the Mazda Cosmo.

The Prelude pictured here is the last of its kind, and we still see people swapping engines from this car to their Civics to this day. Last but not least, the 300ZX is the predecessor of the 350Z, but most people will say it was a much cooler car. After all, it came with twin-turbos and the Super HICAS four-wheel steering system! So owning this "Modern Classics 3" set from Hot Wheels is a much more accessible way of owning a bit of automotive history.

Buying all those 5 cars in real life is going to set you back about $200,000. But, depending on where you live, you can expect to pay between $35 to $100 for a set of these diecast replicas. If you think that's expensive now, they'll probably double or triple in value over the next 2 or 3 years. 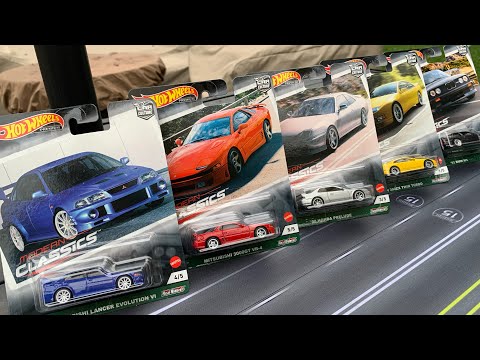