Hershey’s Kissmobile: The Sweetest Ride That Ever Was

No other ride in the world – or the U.S., at the very least – is as sweet as this oddly-shaped, funny-looking custom vehicle that instantly attracts attention, both good and bad. It’s the Kissmobile, the iconic, now-retired product vehicle from American chocolate manufacturer Hershey’s.
8 photos

The Hershey Company, or Hershey’s for short, has been writing chocolate-flavored history since 1900, when the company was founded. Hershey’s Chocolate Kisses were introduced in 1907, and have played a very significant part in making Hershey’s one of the largest chocolate manufacturers in the world. The Kissmobile was the absolute peak of Hershey’s Kisses, a custom vehicle designed to spread the joy and share the Kisses, raise funds, and do some good old-fashioned marketing.

October is Commercials Month here on autoevolution, so we’re taking a few minutes to look back at one of the most iconic American-made vehicles and a staple when it comes to product vehicles – or productmobiles.

Once used by small-time salesmen, product vehicles had a second coming in the late ‘80s and early ‘90s, and many are still around today, in one form or another. The original phase belonged to the 1918 Pep-O-Mint Lifesavers truck and the 1936 Wienermobile, while the second one was dominated by the same Wienermobile and the 1997 Kissmobile. To this day, the Kissmobile’s only direct competitor to the title of absolute American legend is the Wienermobile.

The Kissmobile was commissioned to Santa Barbara-based Prototype Source, the only one of two existing auto shops in the U.S. specializing in product vehicles. Prototype Source also did a bunch of concept vehicles for VW and GM, if the name happens to ring a bell. Bruce Brackman, the Kissmobile project leader, is the same brilliant mind (or mad genius, it’s a matter of perspective) who redesigned the Wienermobile and created a string of other phantasmagorical automotive fabrications that roamed or still roam American roads today. Even he admitted that creating the perfect Kiss was not as easy as we might be tempted to believe.

Three Kissmobiles were created, though most sources say that two were in use by Hershey’s, which would indicate that work on the third was never completed. Each vehicle consisted of a platform – the chassis of a GMC 4-W W-Series truck – with a GM Vortex 5700 V8 gas engine mated to a 4180E transmission. On top of that platform were three Kisses: the unit that survives in the best condition to this day and is accessible to the public on display at the Antique Auto Club of America Museum (AACA Museum) in Hershey, Pennsylvania, had a Kisses, an Almond and a Hugs Kiss on top.

Brackman said that work on the first truck took six months, from the moment he got the idea down to the completion of the project. The toughest part was creating a Kiss that was a realistic render of a real chocolate Kiss, down to the way the outer layer created the impression of being wrapped in foil. In order to do that, he and the team created a giant Kiss mold of foam and wrapped it in industrial foil, casting the mold for the fiberglass shells that would then be placed on the platform.

Each Kiss is 8 feet (2.4 meters) tall, with a 4-feet (1.2-meter) plume that rotates continuously. The vehicle is 25.6 feet (7.8 meters) long and, empty of all cargo, weighs some 11,200 pounds (5,080 kg). You might not be able to tell at first glance, but this baby can haul stuff too: stuff like 230,000 Kisses in the refrigerated compartment in the rear, the Hugs Kiss. That’s candy that the two people in the Kisses Kiss, i.e. the cab, would hand out to children on their various stops, as part of their daily job as Chocolate Ambassadors.

The middle Kiss, the Almond, is actually an entertainment center that includes a large screen TV, a DVD player (remember those?), batteries, converters, and other electronics. Other features include Kisses-branded covers on the seats, GPS and video camera, a roll cage, and custom windshield for the cab, and something called the Kissmobile Stinker. This sounds worse than it is, because it’s a system that creates chocolate-scented air wherever the Kissmobile goes, including through the exhaust.

Despite its odd shape and large size, the Kissmobile was easy to drive, at least compared to other product vehicles. In 2000, Car and Driver got the now-museum-retired unit of the Kissmobile for a test drive, alongside other vehicles.

The conclusion was that, if you were to travel the country in one, the Kissmobile was perhaps the finest – and sweetest choice – because “[it] is appropriately child's play to drive, with plenty of ponies (275) to merge in highway traffic and, with a more than 12-foot [3.6-meter] wheelbase, a ride that is untroubled by scabrous pavement.” The only caution was that “judicious use of the rearview mirrors is necessary to avoid flattening overly eager children clamoring for candy.”

The Kissmobiles did an average of 30,000 miles (48,280 km) yearly, traveling across the U.S. They were retired in 2020 because they were too aged and parts for repairs were becoming harder to come by.

In addition to offering joy to people and handing out candy, the Kissmobiles also raised money for Children’s Miracle Network, a charity that ensured that sick kids got equal treatment in hospitals regardless of whether their parents could afford to pay hospital bills or not. A more cynical observer would see irony in having a company that directly contributed to obesity and assorted ills help pay for sick kids’ hospital stays, but we’re not cynical.

The Kissmobile was a legend among product vehicles, and a legend in its own right because Hershey's didn’t need the extra publicity, but used it either way to do some good. 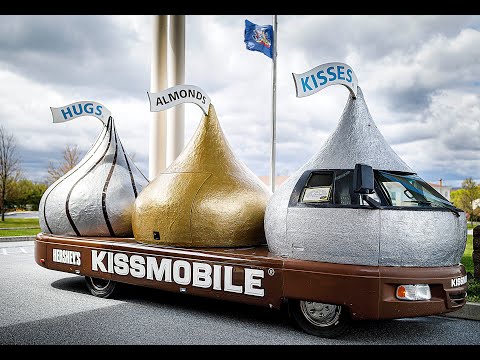 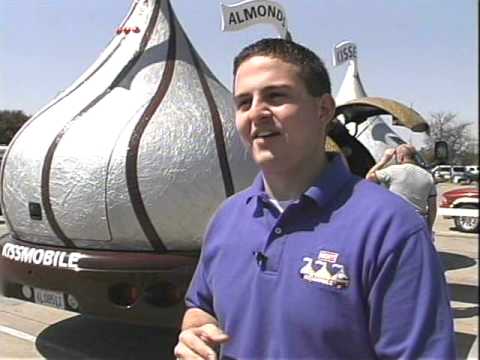