5 Lawmaker Wants Ban on Grand Theft Auto V: It Turns Young People on to Carjacking
Up Next

Home > News > Videogames
Bogdan Popa
One of the reasons many people play Grand Theft Auto V is because it takes just a second to wreak havoc on the streets of Los Santos, but on the other hand, have you ever thought of playing the game without ever doing something against the law?
1 photo
That is exactly what redditor TK-576 has tried to do in a recent experiment, as they attempted to play the game from one end to another without actually killing any NPC.

And as it turns out, that’s not possible, as the GTA V storyline still forces players to murder no more, no less than 726 in-game characters. Franklin is the one leading the carnage with 258 kills, followed by Trevor with 258 kills. On the other hand, Michael is the most peaceful character in the game, as the storyline has him killing just 172 enemies.

There’s also a kill the three do together when pushing Devin Weston off a cliff, so overall, attempting a pacifist run in GTA V is pretty much impossible because no matter how hard you try, you still have to eliminate over 700 NPCs.

In case you’re wondering how the experiment was conducted, the redditor says all missions have been performed using a stealth approach if it was available. No pedestrians were run over, and no unnecessary police chases were triggered.

Do these figures make Grand Theft Auto V a violent game? While this is something rather debatable, U.S. lawmakers have recently called for a ban against GTA, claiming that the number of carjackings in the Chicago area was on the rise, partially because young people explored the world of violence and illegality in video games.

“Grand Theft Auto and other violent video games are getting in the minds of our young people and perpetuating the normalcy of carjacking,” Democratic State Rep. Marcus Evans said earlier this year.

While no decision has been made in this regard, Rockstar is already working around the clock on finalizing the next GTA release. According to people familiar with the matter, it could see the daylight in 2022 at the earliest. 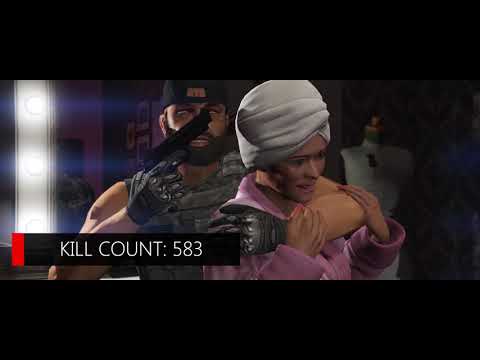