2 Virgin Hyperloop at a Crossroads, After Massive Layoffs Due to Global Supply Chain Issues

It’s been a while since we’ve heard some good news related to the hyperloop, which seemed to have lost traction since last year when different players around the world were coming up with fresh ideas and big plans. A transportation startup is one step closer to bringing real ultra-high-speed ground mobility to Canada.
10 photos

FluxJet is the name of a new hybrid between a train and a jet, able to carry up to 54 passengers at over 1,000 kph (621 MPH), which is three times faster than high-speed trains and faster than a jet. This fully-electric vehicle was developed by the Toronto-based TransPod, in collaboration with various other institutions and international partners.

The company is planning to build a groundbreaking network system called the TransPod Line, which will connect the cities of Calgary and Edmonton in Alberta, Canada. It claims to be different than any other vacuum tube train systems because it’s based on “smart infrastructure” that significantly reduces operation and maintenance costs.

As a result, passengers would pay 44% less compared to ticket planes for the same route while also contributing to a reduction in CO2 emissions of over 600,000 tons per year. And, of course, they would also get to the destination much faster, with FluxJet tubes departing every 2 minutes.

At the recent unveiling event in Toronto, TransPod presented a 1.1-ton scaled-down version of the FluxJet tube, Daily Hive reports. It demonstrated take-off, travel, and landing procedures. It was the culmination of the research and development process that began several years ago. During the next phase, the company will focus on high-speed tests and obtaining certification for the vehicle. If all goes well, the future inter-city line is set to kick off construction by 2027.

The FluxJet development has benefitted from a recent $550 million investment, with the TransPod Line project estimated at $18 billion. 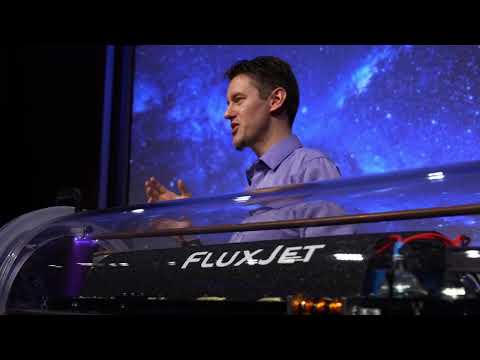