2 Manny Khoshbin Drives a Bugatti Veyron, Explains What He Doesn't Like About It

3 Choosing Between Koenigsegg's Gemera and Jesko Absolut, a Most Enviable Dilemma

4 Take a Ride in the Unique McLaren Speedtail Hermes Edition

Most YouTubers have that “in your face”-way of delivering content that tends to grate. No one likes to be patronized, even if many of us will never be able to afford some of the stuff shown in these videos.
6 photos

Not Manny Khosbin, though. The California-based multi-millionaire and supercar collector lives the kind of life that dreams are made of, but somehow, he still manages to come off as relatable. His latest YouTube video is all about vicarious living for his viewers, as he takes them on a joyride in his 1-of-3 Bugatti Rembrandts.

The Bugatti Rembrandt is the fourth entries in the super-exclusive series called “Les Légendes de Bugatti,” “Legends of Bugatti.” Only three such cars were made, based on the Veyron 16.4 Veyron Grand Sport Vitesse, and they feature the dancing elephant, sculptor Rembrandt Bugatti’s most famous work, on the radiator.

Of these three Rembrandts, Manny has one, another one is in Dubai and the third is probably in Asia. Manny doesn’t say how much he paid for it (the reported price tag was of $2.6 million after taxes), but he does say he got an offer for it. He’s not selling it, though: Manny, the kind of businessman who says everything is for sale at the right price, is now saying his Rembrandt is not for sale. But the offer wasn’t good enough, either way.

The video would be boring by any other YouTuber standards, but it’s not so in this case. Khoshbin talks about the open-top experience and how it’s so amazing he never turned on the music while driving this car, he talks about warming up the tires before hitting gas because “trees are priceless” and you don’t want to lose grip and take out any of them, and he talks about why he would still choose the Chiron first if he were to buy his first Bugatti.

The Rembrandt was unveiled at the 2014 Geneva Motor Show. Manny says his is a “one of one” but only in the U.S., and it still has the same shoes. Such technicalities aside, it is a gorgeous machine, both at rest and in motion. So join the joyride, live vicariously. 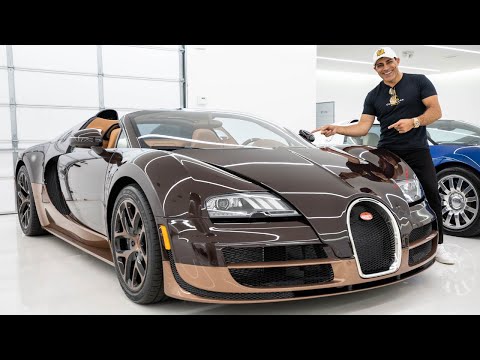