GMC Yukon Drags Camaro ZL1, Mustangs, Stinger, Golf, and It's Not Even Close

Often, the secret to quarter-mile dragstrip happiness does not have much in common with purist muscle cars or high-dollar supercars. Perhaps one just needs an older SUV and a quick mod recipe.
39 photos

Track action can always be a tough nut to crack. But sometimes, there is no need for hugely-expensive teams or brazen aftermarket modifications. Maybe a simple turbocharger will suffice. Well, perhaps there’s more to the story going under the hood. Though, on this occasion, the mystery has remained unresolved. Perhaps that’s just the beauty of “sleepers.”

The videographer behind the Drag Racing and Car Stuff channel on YouTube has prepared some keen sleeper action for the latest Orland Speed World Dragway (Orlando, Florida) feature. The video embedded below is the very latest uploaded as of February 2nd, 2022, and revolves around a seemingly unsuspecting, gray GMC Yukon.

Details are scarce, unfortunately, but the description does include magic words like “sleeper (and) turbo.” Anyway, we can also draw our conclusions by way of no less than five races against vastly different opponents. First up comes some nightly action against a crimson S197 Ford Mustang. A good way to put things into perspective, given the 12.14s (Yukon) and 13.47s (Mustang) results.

From the 0:55 mark, it is about time to get serious, in a traditional America vs. Import manner. Alas, the white Golf ultimately did not represent a major challenge as the hulking, oldish Yukon ups the game into the 11-second territory. Hence, the 11.9s vs. 13.53s victory. Followed, from the 1:25 mark, by yet another skirmish of the same variety: Stinger lines up for the brawl and gets quickly subdued (11.92s vs. 12.88s) by the springy SUV.

We have no idea if these encounters left a few bruised egos or not, but we can be sure the victories continued to pile up. As such, from the 1:52 mark, it was time for an original Mustang to try and best the sleeper Yukon. No chance, though, as the GMC delivered an 11.82s blow to the classic ride’s feeble 13.67s result.

Finally came a modern GM representative. The Chevy Camaro ZL1 from the 2:25 mark probably had the best shot at severing the string of successes. Fret not, though, as the Yukon again upped the ante and came out on top with an 11.49s ET against the ZL1’s close (but not close enough) 11.61s pass! 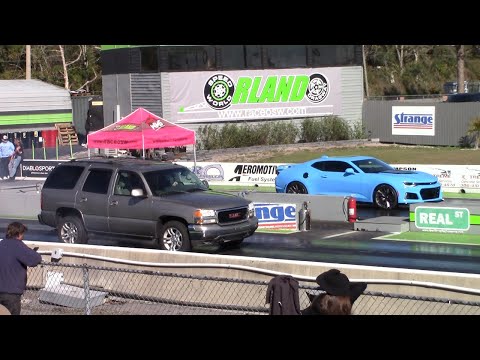