4 Dodge Double Header Is the Most Confusing, But Still Stylish, Custom Car

5 World’s Longest Car, the American Dream Limo, Is ‘80s Extravaganza at Its Best
Car video reviews:
Up Next

Every custom car is or should theoretically be a reflection of the owner’s personality. On that account, this single mother of two from Nashville, Tennessee, did an incredible – and glorious – job on her Ford Mustang.

From Pony to Pussy: The Hello Kitty Ford Mustang Exists and It’s Glorious

Takiyah Middleton’s name might not ring a bell, but you may have heard of the Hello Kitty Ford Mustang in passing. The car, customized to be a rolling celebration of all things Hello Kitty, made international headlines several times in recent years and, to this day, remains one of the most impressive, glorious and eye-catching custom jobs.

Tacky? Perhaps. But it’s definitely memorable. After all, turning your Ford from pony into pussy is bound to attract a lot of attention. In this case, though, it’s the story that should be front and center, because Middleton actually did the work almost by herself, over the course of eight years. She’s still not done.

It all started with a 2006 Mustang she bought off Craigslist for about $8,000. Middleton has two young daughters and, like any decent parent, she wanted to make her kids think of her as some sort of superhero. Pulling up at their school in a tricked-out car was her way of ensuring that happened. Customizing the Mustang took her eight years and an estimated $30,000, but back in 2019, when she spoke to Barcroft Cars, she estimated she still had at least five more years’ worth of work on it.

And yes, $30,000 can buy you a lot of fuzzy pink fabric and rhinestones. Lots and lots of rhinestones.

“I decided to go with Hello Kitty because I really thought the little character was cute,” she says. “She speaks from the heart. She doesn’t have a mouth. And a lot of people don’t really know that.”

Middleton knows that the original Hello Kitty is white, blue and red, but she went for pink because (duh) it’s more of a girlie color. Her car comes with a pink racing wheel, pink and white interior, pink decals, and pink grills that she painted herself by hand. There are rhinestones on both front and rear plates, and on the inside of the doors, a 22-inch screen in the front seat and other six TVs scattered throughout, and a high-quality audio system.

In keeping with the theme, Middleton included plenty of heart cutouts and decals, and even the exhaust is heart-shaped. The rearview mirror is wrapped in what looks like plush pink velvet, while a glittery heart swings from it. The dash is custom painted in white and pink, of course.

Assuming you could still somehow miss this Kitty ‘Stang, it rolls high on 26-inch chrome spinner wheels, with Kitty decals. For nighttime riding in glorious style, Middleton included neon-colored lights in the wheels.

Middleton also customized the engine: a V6 painted with pink highlights, able to do 120 mph (193 kph). However, she only took it as high as 85 mph (135 kph), she tells the same media outlet.

“This is the first car I have ever customized and I did it in my driveway with my own bare hands. I never got anyone to help me with my vehicle because I wanted it to be something that I created,” Middleton says.

“In the city of Nashville the car is very, very popular. When I go through downtown people scream, they take pictures, they ask me multiple questions, they even want to sit on the car,” she adds. “Everybody loves the car. This car changes people’s lives and put smiles on people’s faces.”

More importantly, her daughters love it. They love it because it’s comfortable and because their friends think their mom is rich for owning it.

That said, Middleton is also using the Kitty ‘Stang to do good. She is the founder of the Rychus Rydz (pronounced “righteous rides”) car club, which, in addition to working on cars, does community work feeding and clothing the poor, and putting together blood drives. She uses the car to raise awareness and funds for their work and, when not driving to these events, she takes it to car shows. She says she never loses.

Asked if she would do another custom job like this one, Middleton doesn’t say no. However, she’s not ready to part with the Hello Kitty Mustang yet, having already turned down offers. She will consider it, though, for upwards of $30,000.

Sure enough, beauty being a subjective matter of taste, what is pure awesomeness for Middleton and her friends is a pink, fuzzy, rhinestoned monstrosity for others. But her dedication to the project, her hard work and the fact that she’s doing good with the car should earn her some respect, at the very least. 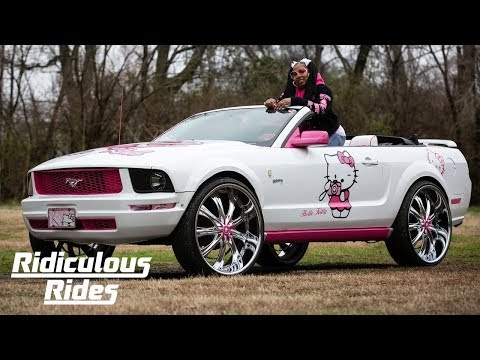