1 Modernized AC Cobra Is a Virtual Far Cry From the Revived, Electric Series 1

While certain companies, and owners for that matter, have started turning the AC Cobra into an electric machine, others have further boosted its performance, and couldn’t be bothered by alternative fuels, as dead dinosaurs still do the trick.
15 photos

Since it’s hard to argue with that logic, not that we want to anyway, we’ll move on to the reason behind this story: a beautiful red-finished Cobra seen at a drag racing event in Germany. The open-top model is said to boast a supercharged engine under that long hood, with no less than 900 hp, apparently.

Not long ago, having that much power available via the right pedal would have made it a hypercar. Since things have changed over the past few years, it can be referred to as a supercar. But no matter what you want to call it, one thing is certain: it goes like a bat out of hell.

Constantly on the lookout for its next meal, this Cobra tried injecting its venom into one bad Ford Mustang. The model is a GT RTR Widebody, with extensive modifications over the stock V8-powered variant of the Blue Oval’s muscle car. Besides that widebody kit and other visual upgrades, it sports a power boost too, though it’s hard to know how much it sends to the rear wheels.

Nonetheless, we could be looking at up to 750 hp with the supercharger kit installed. That’s obviously not enough to put the AC Cobra in its corner and teach it a quick lesson about straight-line speed and quick takeoffs, but at least it’s something.

The video shared down below shows the classic model challenging other Mustangs in a quarter-mile battle, and reveals it up close too, so if you have a soft spot for it, then you know what to do next. 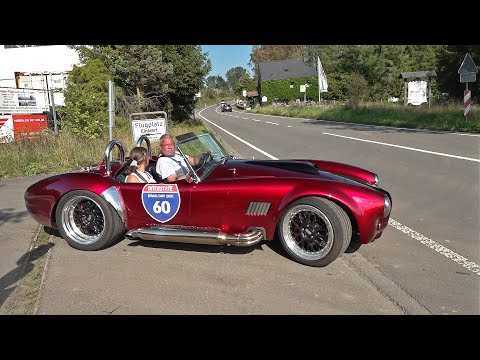