After gaining full control over the AC brand, Ford and Brian Angliss tried to revive the British brand with innovative products to lead the small carmaker into new territories.

While the original Ace was worldwide famous, the 1993 model started on the wrong foot since everyone expected the same results as its '50s and '60s predecessors. Later on, the car was mostly known as the Brooklands Ace to cut the confusion.

This time, the car was designed by Len Bailey as a 2+2 open-top vehicle. The first prototype, known as "Ace of Spades," featured a targa-top, but the final model, which arrived in 1993, featured a classic roadster shape. Again, to cut costs, Ford provided most of the car's underpinnings, including the round headlights and turn signals.

At the front, the car's narrow end with a small radiator grille looked spot-on for a modern roadster. After installing a V8 under the hood, the carmaker had to create a bulge to make room for the air filter, which it did. Unlike the concept car, this was a genuine, two-seat roadster. Its thick A-pillars and steep windshield protected them while driving, while an electric retractable canvas-top kept them dry from the rain. At the back, the carmaker installed a short trunk and a four-round taillights setup, and a dual exhaust system.

Inside, Ace offered a leather-clad interior and plenty of standard features such as a stereo tape CD player, air-conditioning, power windows and mirrors, and an electrically heated windshield.

Under the aluminum bodywork, the carmaker installed the first-ever stainless-steel chassis in the industry. Its nearly 50:50 weight distribution made it a nimble car, and the limited-slip differential helped in many ways. A standard ABS and a powerful V8 engine completed the package. 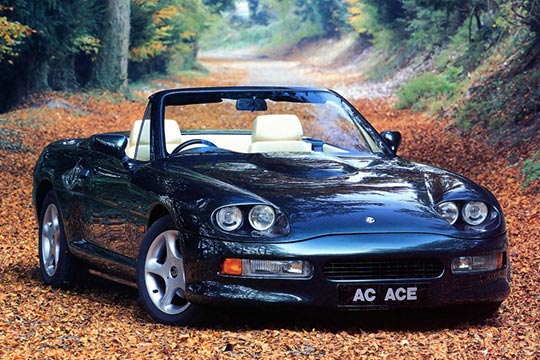