3 Ford Mustang and Jeep SRT8 Seek America vs. Import Glory, It's Not a Close Call

5 Whipple Supercharged S550 Ford Mustang GT Dips Into Low 8's, But Is It Enough?
Car video reviews:
Up Next

There's a reason (or a ton of them) the Blue Oval’s F-Series has been dominating the American pickup truck market over the past 44 years. Just to show how flexible this truck platform really is, here’s a couple of recent F-150 units going the yin and yang way in terms of supercharged and turbocharged manifestations.
23 photos

We have seen many SUVs and pickup trucks literally take the nation's drag strips by storm lately. Ladies now go the Raptor way to establish a bit of empowerment over various cars, such as a C7 Corvette or a Tesla Model 3. Ford’s Edge and the soon to be obsolete Fusion battle for night-time supremacy, and the examples could probably go on forever if we dig deep in history.

Sure, it’s going to be a long time before these lightly modified trucks will be capable of replicating a traditional muscle vs. import six-second battle – but no one says they can’t have a go, right? That was probably the thinking behind creating these two F-150 trucks, whose owners decided that all bets are off, even if that meant going against another Blue Oval.

The Drag Racing and Car Stuff guys have captured some interesting action at the “Street Car Takeover” event that recently took place in Bradenton, Florida. And by that, we mean a few entertaining skirmishes that involve a red 2018 F-150 supercharged to Gen 3 2.9-liter Whipple levels with some help from the specialists at JS Fab & Performance, as well as a blue F-150 that’s sporting a hulking turbo assembly (there are no details on this build, though).

Because the supercharged example is the focus of this recent video (embedded below), we first see this alleged two-class winner at the Bradenton event line up against a 2020 Ford Mustang Shelby GT500 to set the bar as high as possible.

This time around, the Whipple build comes out on top, as the blue turbo has to contend with holding the styling supremacy (that huge bulge on the hood takes precedence against the double side exhaust), and a lesser 10.37s result against an even better than before 10.13s run from the red F-150.

No worries, because the blue example will retaliate against an A90 Toyota Supra from the 2:30 mark with an excellent result of 10.15s to the import model’s 11.03s run. On the other hand, the supercharged F-150 remains preoccupied with domestic battles, as up next (from the 3:05 mark) comes a battle with the ubiquitous Dodge Challenger Demon.

Unfortunately, we have to contend with a botched attempt from the latter, so we just move on towards the presentation part (from 4:20) and see how the red F-150 fared against a few other contenders. Those included an older Chevy truck that didn’t quite rise to the occasion even though it had a neat setup sticking out through the hood. 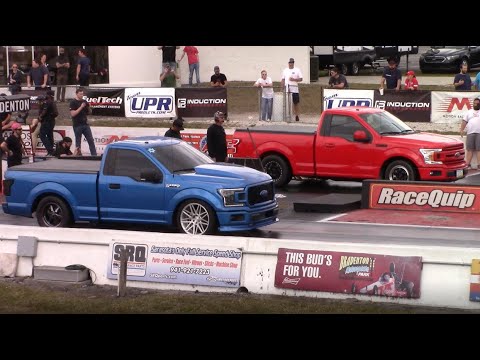