Home > News > U-turn
Aurel Niculescu
All those men who think ladies aren’t exactly drag racing material better watch out for Veronica Rey, a.k.a. Latina Driven, a car aficionado recently turned fully-fledged vlogger, and her 2019 Ford F-150. That’s because she’s one ambitious driver, aiming to morph her ride into the fastest Raptor out there, living life one quarter-mile at a time.
25 photos

According to the latest video from the Drag Racing and Car Stuff (D.R.A.C.S) channel on YouTube, she’s just started her quest. Thus, we can understand why she feels rather shy and emotional on camera. That’s beside the point, actually, because her actions (and very few mods) speak wonders on their own.

What we have here is a 2019 Ford F-150 Raptor (she also owns a 2013 Dodge Durango R/T and 2006 Mitsubishi Eclipse GT) consistently running the quarter-mile in the 12-second ballpark, something even the D.R.A.C.S guys think is very interesting.

We’re actually glad they decided to further investigate the surprising Raptor (tuned for E50 and sporting an AMS intercooler) because it helped uncover the Latina Driven persona. That would be a neat case of empowerment and sweet DIY that speaks both for women and the Latino communities at the same time.

We checked out her YT channel, and although none of the DIY videos feature overly technical work (tire rotation, spark plug replacement, oil and filter change, etc.), it clearly goes against the trope that ladies usually run away from such tasks.

Back to the actual drag racing, the Raptor didn’t win all the battles (there’s a Pontiac encounter that made her very nervous from the 3:40 mark), though it came extremely close when showcasing its mods against a Tesla Model 3 (from the 1:19 mark).

The first rivals shown competing against the Raptor do make the most compelling case for the driver’s talents, though. They’re proper sports cars (an S550 Mustang GT and a C7 Chevrolet Corvette Z06), so it’s extremely impressive not only to see her consistency throughout encounters but also her quick reaction times. You can check out all times in the gallery. 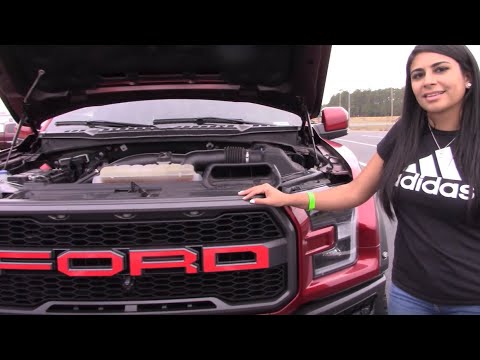