Home > News > U-turn
Aurel Niculescu
A crossover SUV and a midsize sedan are something you would usually expect to see at a family picnic or in a corporation’s parking lot. But the sticky nature of the drag strip allows for marvelous things to happen, including a shot at memorable night-time action for the unassuming Ford Edge and Fusion.
21 photos

The Blue Oval has a lot of models that are usually considered classic drag strip material. Clearly, the second-generation Edge or the recently discontinued Fusion aren’t among the usual suspects. After all, the former is more adept at presenting itself as the owner of the “largest-in-class 12-inch” dashboard touchscreen, while the latter is just about ready to morph into the all-new Evos.

That doesn’t mean that one can’t be proud of said rides. After all, some people do understand the experience is more important than the outcome, at least sometimes. And the footage (embedded below) from the Drag Racing and Car Stuff channel on YouTube is more than enough proof.

With that, one might call it a day – or a night, as is the case here. But the Edge and Fusion were out for blood (both their own and of their challengers), so it’s time for some Blue Oval-exclusive battles. First up comes the Edge, lined up against a Mustang. Of course, the pony takes home an easy win with a clean 12-second pass against the Edge’s constant 13.06s result.

The Fusion, on the other hand, faces off with an F-150 Raptor, which dominates it only in terms of stature. Instead, the sedan teaches the adventurous pickup truck a drag racing business lesson and scores yet another win.

Last but not least, it’s time for our unlikely drag racing contenders to battle for quarter-mile supremacy among themselves, and the Blue Oval's strategy of slowly abandoning the passenger car segment proves correct in the most surprising ways... with a 13.074-second victory of the crossover against the sedan’s 13.3s result. 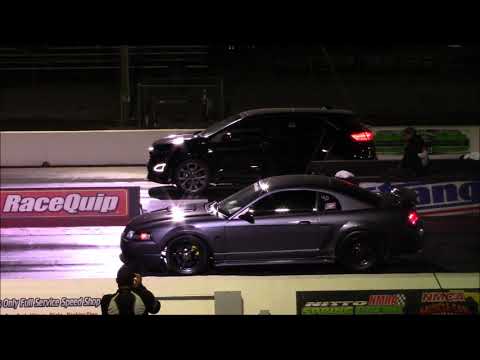