2 Ford Mach-E and Model Y Embark on the Loveland Trials, Surprises Are a Given

Aurel Niculescu
Here’s an orange S550 Ford Mustang GT that didn’t contend to living a quiet life as America’s best-selling sports car and aimed for quarter-mile glory. It’s also a great example of a competition project that showcases what can happen when things escalate. But when facing fearsome competition, one must wonder – is it enough?
26 photos

The Drag Racing and Car Stuff channel on YouTube is out there looking to answer this question that’s about as old as the planet itself, or at least as old as the chemical formula for the perfect drag racing tarmac.

The orange S550 Ford Mustang GT we see here going against a Fox Body Mustang, a Pontiac GTO, Camaro SS and a Chevrolet Camaro SS was caught darting down the line in search of the best quarter-mile time during the Hail Mary Derby, an event that brought us many wonderous attempts.

It seems that even though it’s been held back in November, fresh footage from there keeps surfacing – and we’re glad to see this eclectic battle because we’re going to watch it as a great appetizer for glorious things to come in 2021.

By the way, on this occasion, the description gave us the name of this particular Mustang GT’s owner (Terry Eshman) for a little background check, which came up with evidence of Tremec Magnum XL stick shift action going alongside supercharger duty performed by a Gen 5 Cobra Jet Whipple supercharger.

Those, along with a lot of other modifications, have turned this S550 Mustang into an 8-second monster. To put its capabilities to the test, the Ford went up against a powerful roster of competitors. First up was a Fox Body Mustang which exuded badass attitude by completely ditching the hood; even though it’s bad for aerodynamics, the mods were more than enough to secure the win.

Its 7.87-second result (at over 174 mph/280 kph) showed the older sibling to come from a different league, so the S550 Mustang went on in search of more approachable rivals. The Pontiac GTO that followed proved to be the charm, with the Ford coming down from the previous 8.67 to an 8.46 that bested the GTO’s 8.55 result.

Times continued to improve when lined up against other competitors – including a Camaro SS and a C7 Chevy Corvette, with the orange and black ‘Stang dropping to 8.32 at almost 169 mph (272 kph). We invite you to check out the video embedded below (or the gallery) to see if that was enough to secure new wins. 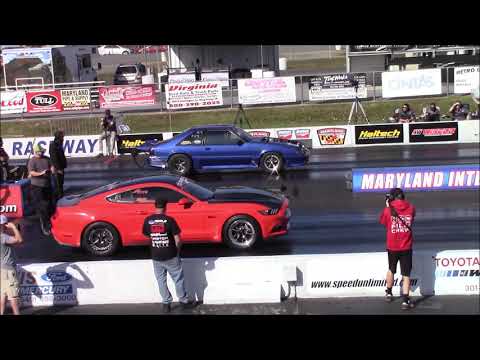