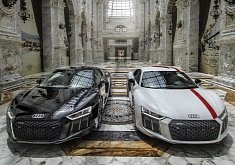 Home > News > Autoevolution's Truck Month
We like to call them, simply, trucks. Europeans and others add the “pickup” prefix in there, in the vast expanses of the Australian continent they are at times referred to as “utes,” while in Africa, “bakkie” is what hits the right spot. But no matter where you are, you all know what these incredible machines are all about.

Last year, the American market swallowed 14.5 million new vehicles. The top three best-selling nameplates accounted for 13 percent of that, and they were all trucks: the Ford F-150, the Chevrolet Silverado, and Ram’s machines. Together with the GMC Sierra and Toyota Tacoma, they occupied five of the top ten spots for best selling vehicles in the U.S. in 2020.

Pickups have been around since forever. Gottlieb Daimler’s No. 42 is believed to have been the first one ever built in 1896, but it was quickly followed by a flood of similar contraptions, coming from companies like Autocar or Reo.

It wasn’t until 1917 that America first got its taste of a pickup truck for the masses. It came in the form of the Ford Model TT, a workhorse built on the skeleton of the Model T and inspired by the military trucks that served in the First World War.

More car companies joined in, and by the 1950s there were so many trucks out there that people started buying them to use not only as farm or business equipment, but as personal rides as well.

It was from that point onward that these machines moved from being simple means of cargo-hauling to rides meant to be enjoyed on the road, taken for a night out, or off the beaten path. They are now used for pretty much everything, from taking the kids to school to going on dates, and they’ve even gotten involved in drag racing. And don’t even get us started on what trucks, old and new, mean for the custom industry today.

The pickup truck segment is presently so large that it’s impossible to get a comprehensive look at it without a directed effort. This is why February 2021 is Truck Month here at autoevolution, a time for our army of writers to go head-on into this segment as we try and capture the essence of the almighty truck.

28 Feb 2021, 21:19 UTC / This is the kind of stunt Ken Block would pull if he wasn't famous. And it proves what everybody knows, that tires are better than tracks

Yes, Nikola and Trevor Milton Lied Through Their Teeth

28 Feb 2021, 07:35 UTC / The claims made about the Nikola One prototype were either completely false or exaggerated, the findings of an independent internal review show

A Chevy Silverado, a Most Unusual Crash and a Face Full of Airbag

28 Feb 2021, 06:27 UTC / Viral video shows truck mounted onto a parking bollard and stop sign, with the driver freeing it by reversing before the side airbag deploys

27 Feb 2021, 18:22 UTC / Contrary to the wheel-tire combo, this 1951 Ford F-1 is rocking old-school muscle in the guise of a smooth-running flathead motor with Edelbrock heads

27 Feb 2021, 16:05 UTC / This camper is composed of lightweight welded aluminum and comes in in several variations suitable for mid-size, full-size, and Jeep Gladiator truck beds.

27 Feb 2021, 14:27 UTC / The Jackal has some serious off-road suspension which is sadly too soft and tall for drag racing. It wins against the Raptor but loses to the TRX

27 Feb 2021, 10:43 UTC / Have you ever considered what kind of vehicle you would want to drive in case we would be facing a full-on zombie apocalypse?

26 Feb 2021, 19:22 UTC / We've seen modern trucks lowered like that, but never two HD duallies at the same time. This requires a custom chassis and wheel tubs to fit the tires higher up

26 Feb 2021, 14:17 UTC / Aftermarket specialist Holley Performance turned this 1984 Dodge Ram D100 into a sleeper, though the team kept the build in the Mopar family

1949 Dodge Power Wagon Gets an Extra Set of Doors, Looks Like a Mammoth