Aurel Niculescu
Although drag strip racing is a lot more common, America also loves its half-mile top speed racing events where even cars that are more inclined towards actual track racing can have a chance at straight-line glory. For example, the Ford Mustang GT500 – especially when equipped with the Carbon Fiber Track Package - would be notably out of its element on a classic drag strip. But not at the Shift-S3ctor's California Airstrip Attack, where it was thoroughly tested by a couple of Chevys.
44 photos

If you have watched before the exploits of the young Southern California socialite Austin Everett – aka Speed Phenom – you already know the YouTuber owns both the red C8 Chevrolet Corvette and the blue Shelby GT500 Carbon Fiber Track Pack featured in his latest video.

If you didn’t, no worries, because it becomes clear from the first moments, when he fuels up both cars before the start of the event. We enjoyed seeing his adventures in both the mid-engine C8 and his more recent (and rougher) days with the GT500. So, of course we jumped at the chance of seeing the Chevy and Blue Oval wonders of the moment have a one-on-one showdown for top speed glory.

But before that happens, the GT500 had to fight another Chevrolet – the Camaro ZL1, which is a lot closer to Ford’s performance levels, especially since the 650-hp monster was also tuned to undisclosed new levels. Everett even did two runs against the Camaro ZL1, one with all the aero bits installed (3:30) as if it just came from a track session, and the second with all of them removed or modified (6:20) for a drag event.

Unsurprisingly, both runs were snatched by the GT500 – the second with a short delay caused by an R8 crashing and losing a wheel (check it out at the 10:30 mark). The real surprise came when the Shelby faced the C8 Corvette and its 495-hp mid-engine force (from 14:45) … because the 760-hp monster took a hammering to remember!

Sure, everything has a logical explanation, such as the Shelby struggling to put the power to the tarmac during the initial stages of all three races (there was some dust on the airstrip) - and Everett explaining to his followers in the comments section the Launch Control system of the GT500 causes a big delay... while the Chevy was “instantaneous.” But still, that’s a big loss in our logbook... 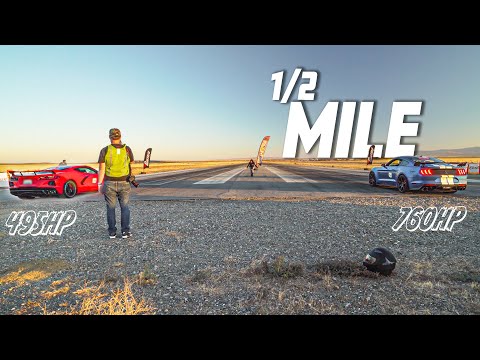