1 NASCAR 21: Ignition Video Drops Some Juicy Details About the Game

2 The Story of the Hudson Hornet, the Forgotten Six-Cylinder Muscle Car

4 Here Is a First Look at NASCAR 21: Ignition, Coming to PC/Consoles in October

Home > News > Videogames
Cosmin Vasile
It’s a pity that NASCAR 21: Ignition won’t be coming to the new consoles, PlayStation 5 and Xbox Series X/S, at launch, but at least we know those who buy it on PlayStation 4 or Xbox One will be able to upgrade to the next-generation version for free.
6 photos

Developed and published by Motorsport Games, NASCAR 21: Ignition is built on Unreal Engine 4, whereas the previous games were made in Unity, an engine that gave the series a cartoonish look and rather under par physics.

This time around, NASCAR fans are promised not just better graphics and higher frame rates but also a game that’s closer to a realistic simulation experience rather than an arcade formula, at least that’s what developers are saying in their first “dev diary” revealed earlier this week.

Although the previous video did show a little bit of actual gameplay footage, it was hidden behind loads of marketing stuff and commentary. A few days after Motorsport Games dropped their first “dev diary,” the developer released what appears to be a chunk of raw, unedited gameplay video.

Its 50-second video shows an onboard lap from a car at the Daytona International Speedway. This is the first gameplay footage from NASCAR 21: Ignition, but Motorsport Games announced new “dev diary” videos will be released in the coming weeks, which might or might not contain more gameplay elements.

We’ve been told that the next “dev diary” will focus on the circuits included and how the folks at Motorsport Games plan to faithfully recreate them in the game with the help of NASCAR.

Until then, check out the less-than-a-minute early gameplay footage that shows the upcoming NASCAR 21: Ignition game in action. It’s not spectacular, but it’s all we have at the moment, and we know fans are always hungry for early info about their favorite franchises.

Motorsport Games announced that NASCAR 21: Ignition will be released for PlayStation 4, Xbox One, and PC on October 28. A free upgrade to PlayStation 5 and Xbox Series X/S will be available later on. 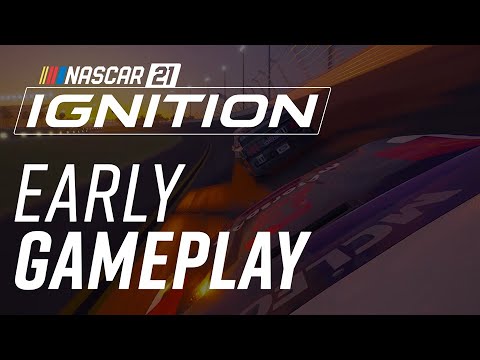