1 On Board Ngoni, the Breathtaking, $53 Million Sailing Yacht Also Known as The Beast

Earlier this year, word got out that Amazon founder Jeff Bezos had treated himself to a fancy new toy. This $500 million superyacht would, upon delivery, instantly break a handful of world records. He’s one step closer to that moment, which is timed for 2022.
9 photos

That superyacht is Project 721 or Y721, the largest superyacht from luxury Dutch shipyard Oceanco, and it just launched at Zwijndrecht, on its way to Alblasserdam, where the final fitting-out will take place. You can see a video of it after it was rolled out from the sheds at the bottom of the page: it only shows a teaser of the final build, but it’s enough to offer a decent appreciation of it.

Delivery is scheduled for 2022 after it completes sea trials. The exact date has not been announced, and Oceanco has so far denied requests for comment on whether Bezos commissioned it – as was to be expected. However, reports in trade publications note that he bought it in 2018 for some $500 million. Upon delivery, as promised, the superyacht will come with a series of world records, including the title of the world's largest sailing yacht, the largest superyacht ever from Oceanco, and the longest vessel to be built in the Netherlands.

Supposedly based on the Black Pearl, which is arguably the most recognizable built from Oceanco and also the world’s largest and most advanced DynaRig sailing yacht, Y721 is a three-decker measuring 127 meters (417 feet) in total length. It will feature three masts and a bowsprit, and comes with a black hull and an overall classic, elegant silhouette.

With Y721, Bezos will also take delivery of a shadow yacht, which will be a custom version of the YS 7512 model from Damen Yachts. It will carry crew and personnel, provide additional space for meetings and entertainment, and host all the billionaire’s toys, including a helicopter. You can’t put a helipad on a sail-assisted yacht so, you see, a shadow vessel was a necessity. 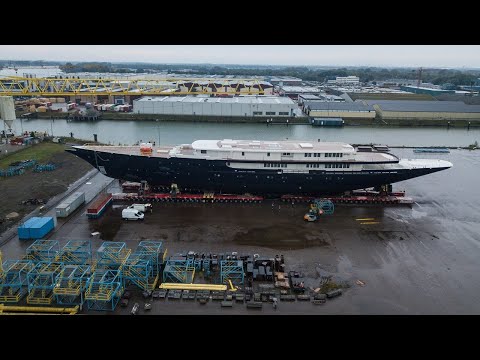