3 Four-Door Ferrari Station Wagon Actually Has Five Doors, But Is It Sacrilege?

Ferrari Purosangue SUV Test Vehicle Spied on the Road, Is a Maserati Mule

Mihnea Radu
After many years of hesitation, Ferrari is finally willing to put its badge on a real SUV. Purosangue is its name, and today, we've got a prototype undergoing testing in Europe.
7 photos

At first glance, this looks like a mule with provisional parts. Many elements indicate that this could be a Maserati Levante beneath the camo, including the angle of the rear window, the tapering of the greenhouse, and especially the taillights. However, this sits much closer to the ground than even the sportiest Levante.

It's way too early to guess what this car looks like. In fact, Ferrari is one of the few companies which doesn't like its secrets to be known. Nobody was able to guess the name of the 458 or the 812, even though they're just numbers. And even the designs of their simplest facelifts are hidden from view when testing.

However, we do have some tangible details. As we've discussed in our previous story on the subject, the Purosangue is said to have a new front-mid-engined layout with a transaxle gearbox (at the back). This would be pretty unique for an SUV, and suggests Ferrari is after some real handling benefits. Many 4x4 have promised drift modes and such, but you almost never see them chasing Porsches at the Nurburgring.

This would also mean that the front wheels would either get a prop shaft back from the gearbox, a separate gearbox like the Lusso/FF or, more likely, some electric motors for motivation. The schematics shown two years ago also suggest a new type of suspension and very low 2+2 seating. Hopefully, all this is ready soon, as the Purosangue already has to fight rivals from numerous reputable European exotics makers. Either way, we predict that it will be very popular and quite profitable for the Italian house of speed. 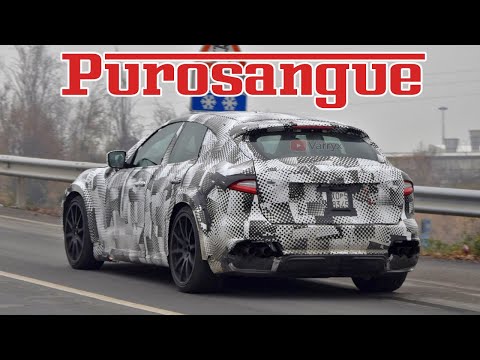