1 2JZ-Powered Toyota Supra Blasts Through the Quarter-Mile in 6.4 seconds

If you go down to your local drag strip, you'll see cars lining up in pairs to have a go against each other down the quarter-mile (402 meters). But the guys at Throttle House took things a little further as they brought the third car into the equation, making things just a bit more exciting.
10 photos

For some people, it may be hard to keep up with all the information regarding the fast SUVs available on the market today. Some might think that the Porsche Cayenne Turbo is the fastest around. Others may place their faith in the Lamborghini Urus because who wouldn't rush to get behind a carmaker with such a remarkable background in building supercars.

But you mustn't lose sight of the fast SUVs built in North America. The Dodge Durango Hellcat and the Jeep Trackhawk were brought forth to go up against a Lamborghini Urus, and just by looking at the stats, Lamborghini fans could get worried. The Hellcat's Supercharged 6.2-liter V8 engine puts out a massive 710 horsepower and 645 lb-ft (874 Nm) of torque, making this the most powerful contender in today's challenge.

The Jeep Trackhawk is not that far behind, as it has the same torque figures and just three horsepower less than the Durango. In the meantime, the Urus packs a twin-turbocharged V8 that puts out 627 lb-ft (850 Nm) of torque and just 650 horsepower, making it the least powerful SUV here. All three of them use AWD, so traction levels should be optimum from that point of view.

The Urus weighs roughly 4,844 lbs (2,197 kg), making it the lightest of the three, as both Durango Hellcat and the Jeep Trackhawk weigh over the 5,300-lb (2,404-kg) mark. At the same time, the Lambo is more expensive than both of its competitors put together. Still, if you're looking for more than just pure grunt, you'll undoubtedly appreciate the luxury found inside the cabin of the Urus.

The initial sound test is enough to have you on the edge of your seat as these three SUVs prepare for launch. As expected, the Lamborghini is left behind from the get-go as the two Hemi-powered vehicles take the lead. Even though the Durango is heavier than the Trackhawk, it's lurching ahead with all of its 3 extra hp. The gap isn't all that big between the three, about a car length worth of distance, and the Urus comes in 3rd.

The post-run conclusion is that the Urus is having a bad time because its Pirelli tires aren't getting up to optimum grip due to the lower temperatures outside. They go at it a second time, and they ditch the launch control to see how things would go down in a real-life, traffic light kind of situation. Nothing seems to be different, really, albeit the Trackhawk seems to be catching up at the very end.

I was really curious to see if things would be different for the third run, which had a rolling start. And the weight advantage of the Lamborghini kicks in, as it jumps ahead of the pack; even its driver is surprised at what's going on. While the Trackhawk holds a steady second place once again, it's the Durango that comes in last this time. 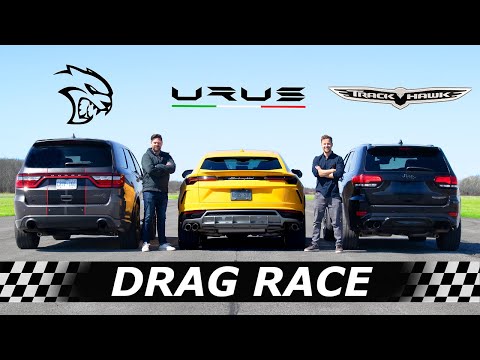