For the Price of a New Car, Louis Vuitton Is Selling an Airplane-Shaped Handbag

Dragos Chitulescu
Now, this is something I've been waiting to see for a while. I mean, if you've got two cars that are off-road capable on your hands, and you want to see which one is faster, why choose tarmac when you can just put them through their paces on a dry lake bed?
13 photos

And this is exactly what's happening here, as we get to see a 2021 Ford Bronco Sport Badlands going up against a 2021 Toyota RAV4 TRD Off-Road. If you're in the market for a brand new compact, off-road crossover, you might be oscillating between these two cars. This quick race isn't going to settle which one of these two will be the best choice for you, but it might tip the balance one way or the other.

The Bronco Sport comes with a 2.0-liter turbocharged inline-4 that puts out 250 horsepower and 277 lb-ft (375 Nm) of torque. While the RAV4's engine has more displacement, being a 2.5-liter, it's a naturally aspirated unit, which means it only provides 203 horsepower and 184 lb-ft (250 Nm) of torque. You would really expect more out of a car that comes with a TRD badge, but maybe that's just me. Both cars are AWD and have 8-speed automatic transmissions, but the RAV4 is just a little lighter in comparison, so don't expect a miracle.

Given the specs, it doesn't look like the Toyota will stand a chance in this race, and if this were a Beauty Contest, the Bronco would win it hands down. Price-wise, the Bronco tested here costs $36,880, while the RAV4 that was brought into play will set you back $42,050. Of course, you have to follow the characteristics of interest to you, which means that the more expensive car might be your preferred choice at the end of the day.

But let's get back to the middle of nowhere and see how this race goes. They opt for a three-honk countdown, as there's no one around to signal the start for them. The RAV4 driver jumps the start to get ahead of his opponent, but the Bronco is quickly back on the saddle and takes the lead. "No replacement for displacement" doesn't seem to count here, and the turbocharged Ford wins the race with a 90+ mph (144+ km/h) exit speed.

As they head back for another run, the RAV4 is switched to Sport mode, but it's not like that will make up for the lack of power and torque in this thing. This time the Bronco Sport takes the lead from the first moment and confirms the fact that the RAV4 did not stand a chance in this challenge. I wonder if the RAV4 Plug-in Hybrid would have managed to win against the Bronco Sport, given its increased performance as opposed to the one tested here. But then again, drag racing a Plug-in Hybrid would go against its purpose.

But anyway, if you start looking for a car with straight-line acceleration in mind as one of your main objectives, you might want to divert your attention to another segment. Or at least wait for the release of the Bronco Warthog, which we're hoping will at least get the twin-turbo 3.0-liter V6 used on the Ford Explorer ST. Can you think of any big Toyota that would still be able to keep up with that? 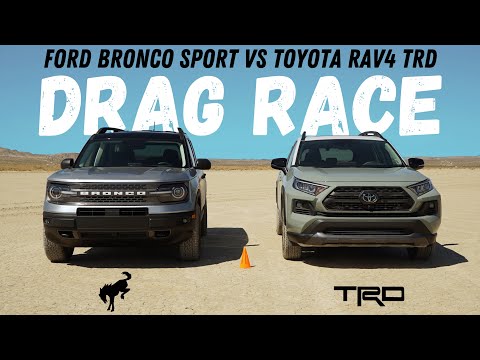