2 Snap Launches Pocket-Sized, Flying Camera That Takes Off From Your Palm, Can Shoot 2.7K

If there’s one hard-to-ignore annoyance with drones is noise pollution, with these otherwise extremely useful aircraft being quite loud due to their propellers. This Florida-based startup plans to solve that problem and help create a quieter urban environment with its next-generation silent drone.
6 photos

The name of the company is Undefined Technologies and its brainchild is called Silent Ventus. It is an all-electric flying machine that doesn’t look like your average drone and it uses another propulsion system, too. It is powered by ion propulsion through a proprietary technology that promises a minimum noise signature of the aircraft.

According to Undefined Technologies, commercial delivery drones generate between 85 and 96 dB of noise, while U.S. regulations allow for noise levels of 50 to 70 dB in residential, industrial, and commercial zones. NASA research quoted by the startup shows that people find the high-pitched buzzing of drones even more irritating than road traffic noise.

The company aims to achieve noise levels below 70 dB with its ion-powered Silent Ventus and it already shared footage of its prototypes completing test flight missions of up to two and a half minutes at below 85 dB. The goal is to increase flight time and decrease even further the noise level, so that the drones can be used for a variety of applications, from last-mile delivery to civil, military operations and more.

However, so far, Undefined Technologies hasn’t offered much information on its praised technology. It did reveal though that it uses “innovative physics, making it viable to use ion propulsion in atmospheric conditions with superior performance of up to 160 percent compared to current ion thruster technologies.”

The design you see in the featured image is close to the one that’s going to be used for the final product.

You can also take a look at a previous prototype achieving the aforementioned two-and-a-half-minute test flight in the video below. 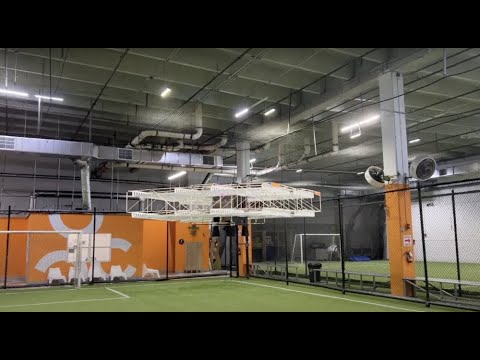