3 Frog-Eyed 1974 AMC Matador X Hits the Drag Strip, It's Quicker Than You Think

Titled by the organizers as the “premier motorsports event of the year,” TX2K22 just concluded its five days of action with full stands. While not all days were sunny ones, the races did (copiously) make up for that.
17 photos

Certain events only take place over the weekend or during a single day. But TX2K22 made sure to account for the sometimes-pesky spring weather and had enough leeway between March 16th and 20th. And it was for good reasons, as the sunny days saw crowds of 12k strong in attendance at Houston Raceway Park (Baytown, Texas), according to the organizers.

Naturally, that meant someone had to keep them entertained. Case in point, the videographer behind the Drag Racing and Car Stuff channel on YouTube was on point during TX2K22 and already has a cool specimen of a nail-bitingly close race to highlight. And it is one of the very traditional Mopar vs. GM varieties, just in case you were wondering what gives.

By the way, there is virtually no reason at all to consider these battle-hardened racers and their spectacular rides anything but monsters. The decals clearly show that we are not dealing with stock representatives of the Dodge Challenger SRT Demon and Cadillac CTS-V breeds. The former crimson beast wears the brand of Baily’s Hyperformance Factory from Fort Worth, Texas. Meanwhile, the latter is an older acquaintance of D.R.A.C.S., the turbocharged 2009 Cadillac CTS-V from Vengeance Racing.

Logically, the audience was fully expecting an epic battle for ages. And they sure got one, frankly. The turbo Caddy CTS-V rolled better off the line and had the advantage when passing the Christmas tree as the opponent almost pulled a wheelie off the starting block. Then, Baily’s monster sure seemed to catch up... Or maybe it was just the shooting angle of the video embedded below. 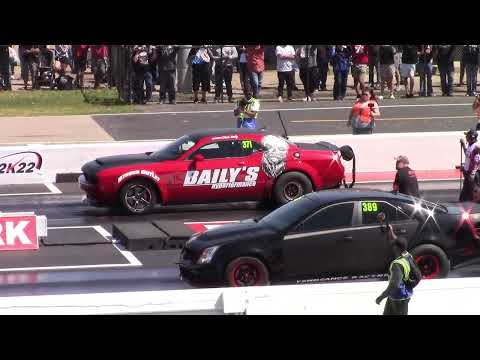