Priced at $57,950 excluding destination charge, the Q50 Red Sport 400 AWD is the most performance-oriented sedan currently offered by Infiniti. Be that as it may, its torque-converter automatic tranny leaves much to be desired over the quarter mile against Audi’s ZF eight-speed auto.
10 photos

Intelligent All-Wheel Drive also happens to be inferior to Audi’s quattro system. What’s more, the S4 in the featured video is an idea lighter at 3,858 pounds (1,750 kilograms) compared to 3,993 pounds (1,811 kilograms).

The cars in the featured video aren’t stock, though. Both develop an estimated 440 horsepower, but peak torque apparently favors the S4 with 480 pound-feet (651 Nm) versus 470 pound-feet (637 Nm). In the first race, the four-ringed sedan launches better, shifts quicker, and gaps the Japanese challenger into submission. The second run concludes with a clear win for the Audi, and the roll race from 50 kph (31 mph) ends on a similar note.

While it may feature the FM platform that Nissan further developed into the PM platform for the GT-R, the Infiniti is outdated where it matters. The front-midship vehicle architecture debuted in the early 2000s in the G35, and the latest application of this gray-haired platform is the brand-new Z.

Another point of contention would be the market’s first steer-by-wire system, which is dubbed Direct Adaptive Steering even though it’s been described as numb. It’s also worth mentioning that Infiniti recalled the Q50 in 2016 to reprogram the Direct Adaptive Steering control unit to correct an error that may alter steering responsiveness and turning radius at startup.

The S4 isn’t faultless either. From trailing-arm lock nuts that may break due to stress corrosion to oxidation on the Passenger Occupant Detection System’s connecting cable, the Audi has seen plenty of recalls thus far. 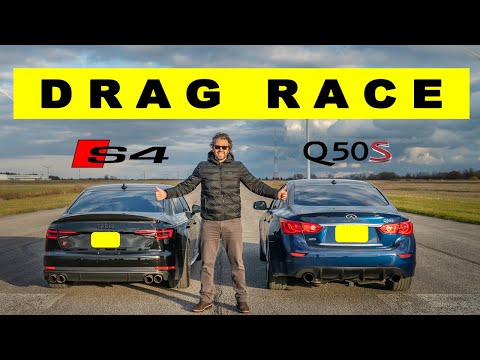