People have developed all kinds of hobbies over the years, from building furniture to professional makeup. However, we don't see car body repair becoming a thing, and only a few mechanics are brave enough to share their work on YouTube.


That's where Arthur Tussik comes in. Almost every week, she shares his wrecks, and it's usually highly sought after motors like this BMW 7 Series. It's an older model, sure, but still, one that's very popular with Russians and just about every guy who wants to look like a rapper or drug dealer.

He starts by inspecting and prepping the car. Both the damaged doors (on the left side) are removed and stored away. Some of the interior is also stripped, as the pillars will need to be fixed.

Fortunately, the frame of the car in good condition, but the outer skin around the sill and rear quarter will need replacing. Arthur drills out the factory welds. A donor part is tacked into place and checked for alignment with the door. After a second try, the gaps are within the factory tolerances and might we add better than any Tesla.

After that, the mechanic checks that the trunk fits in with the new fender and moves on to the hood. This is in relatively good condition, save for a few dings, but because it's made from aluminum, the metal needs to be heated up first which he does with a gun.

A few taps of the hammer, some pulling and prodding and she's back in shape, ready to ship out to paint. It took ten days to get the 7 Series back in shape, split evenly between bodywork and paint. Hopefully, the new owner knows the full history of the vehicle, especially since thousands of people watched it being repaired on YouTube. 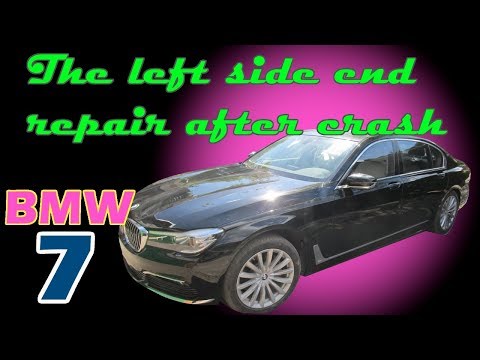