4 Tesla Insurance Rates to Go Up by 30 Percent, the Company Calls Foul

5 Watch a Crashed E46 BMW M3 Get Fixed by a Russian Mechanic
Car video reviews:
Up Next

The X5 is like a dinosaur of the big luxury SUV business. The current one is based on the previous model and is about a year away from being replaced. But the Russians still love it.
4 photos

And why wouldn't they? If you look past the fact that it's a big truck, the X5 is sporty, with wide hips and a brooding front end. Sadly, big, heavy vehicles don't mix well with urban traffic, which is probably why this one ended up damaged on both sides. Sometimes, what looks like a gap you can squeeze through is actually not.

At first glance, the damage looks to be only cosmetic. But once Russian mechanic Arthur strips back the damaged skin, he finds even more broken bits. In total, it took him ten days to get the X5 back on the road, five of which were in the paint booth.

This video spends more time examining the more delicate details of body shop repair. It's delightful stuff if you're into this sort of old-school stuff. It's those rear quarter panels that require a lot of hammering.

There's a tool we haven't seen before. Instead of welding little nails to the body and pulling it out, there's now something that looks like a row of teeth and a special tool to pull them together at once. Is that a metal shrinker too?

The right side is a little odd. First, the mechanic spends time pulling the fender into place, but later cuts most of it and replace the damage with sheet metal from a donor car. Once the damaged section is removed, the bends on the inner structure can also be seen.

With the chassis pulled back into place, Arthur can now line up new doors, along with front and rear fascias. He makes this look easy, even though it's not. 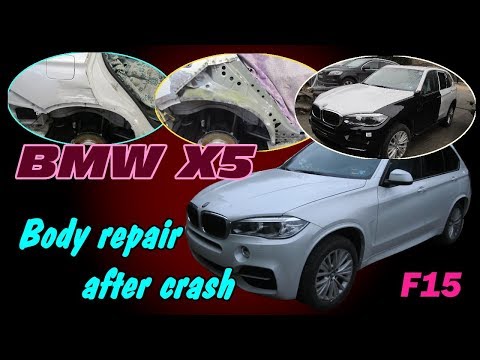