The Audi Q5 is right up there on the list of desirable old German SUVs. It's not on the same level as the BMW X5, but you might still want to buy one... for your wife.
4 photos

We're kidding, of course, but there's no denying the Russian mechanic has fixed a lot of X5's, and yet this is the first Audi Q5 we've seen being put back together.

There's a wide range of reasons why you might want to watch this video. For example, you might be interested in buying a wrecked Q5 yourself, or maybe you're wondering if repairs that look clean are also sturdy.

The damage on this quattro SUV is mild compared to the BMWs we've seen. Must be because Audi drivers don't like to race as much. However, they are still going to crash from time to time, just like everybody else.

A used Q5 will usually cost more than €15,000. However, if you go for the crashed version, you might spend less than half as much, which is why people are taking a gamble with their money.

Once again, this looks like an American import, bought from a site called Insirance Auto Auctions Inc. The damage isn't too severe and is concentrated around the front end.

Arthur, the Russian mechanic, quickly decides that while the hood can be saved, the front fenders, bumper, front beam and headlights need changing. However, that's not as scary as seeing the bent chassis rails.

They are pulled back into their original position and hammered out. Arthur then cuts off a side of the left rail, which is something we've never seen done before. It's to give him better access to the bent areas.

It's always fun to see how rudimentary tools can be used in body repair. For example, the hood is done with pieces of woof and a regular hammer. Installing new fenders, headlights and a bumper seems like a straightforward job compared to all the cutting done before. 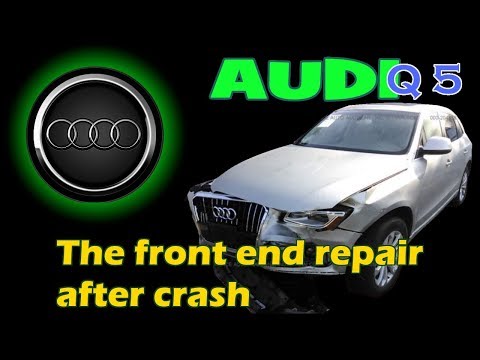