So you want everyone to know you're as rich as a mafia boss but you can only afford a Ford Fiesta? No problem, just buy a Porsche Cayenne wreck, ship it to Rusia and have Arthur the mechanic fix it.
2 photos

We discovered this guy about half a year ago, and everybody began following him. Our favorite videos are of expensive BMWs being fixed, but since there haven't been many of those recently, we checked out some Porsche Cayenne videos and found they are definitely worth your time.

The Cayenne pretty much put the Sport in SUV, with the best handling in the segment. Nowadays, everybody makes fast 4x4, but this one set the benchmark and is idolized, especially in Russia.

Wrecked write-offs are cheaply bought in America and imported into Russia, where the economy isn't as good as it used to be. We've got a couple of them here, one suffering from a rear-end shunt and the other a front end collision.

In theory, the repairs are quite similar. Arthur first strips off all the damaged body panels to see what he's working with. Using lasers, he measures how far the bodywork has been bent during the crash and starts pulling it back out with specialized pullies.

Where needed, new panels are welded into place. If you're of a squeamish disposition, you might not want to see what a Cayenne looks like its whole back end chopped to pieces.

In theory, some of the structural rigidity has been lost here. But if you're just driving the car regularly down the road, this won't be noticeable. What you might, however, notice is a little bit of moisture in the cabin or imperfect sound deadening.

But the visual impact of taking a wreck and making look as good as it did when it left the factory, now that's what a body repair mechanic needs to be praised for. 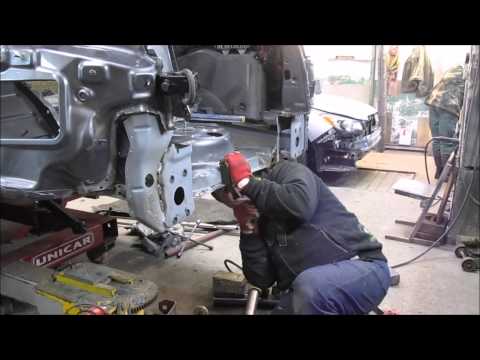