4 A Closer Look at the Cupra Formentor Powertrains

5 Cupra Formentor Takes to the Streets for the First Time, Gets Caught on Camera
Up Next

Mihnea Radu
Everybody knows about the relationship between the Volkswagen Golf R and the Audi S3. However, there's also a Spanish relative that we'd go as far as to call "exotic." Meet the Cupra Formentor, technically not a hot hatch, but a competitor to the BMW X2 M35i and the Mercedes-AMG GLA 35. That's right, it's a compact crossover.
4 photos

The Cupra has always been directly connected to Audi's S3. For example, the first-gen model had the 1.8-liter turbo, the ones with the fancy 5-valve setup. After that, we entered the 2.0 TSI/TFSI era, and even though the Leon didn't have the AWD, it kept up in power.

The Formentor is slightly different. It's not a member of the normal SEAT range, and you can currently only have one powertrain, which is a 2.0 TSI making 310 PS (306 hp). Coincidently, that's the same engine fitted to the latest Audi S3 sedan and hatchback, both models having 10 horsepower less than the equivalent Golf R. However, it's worth noting that a 1.5 TSI with 150 PS (148 hp) and an "e-Hybrid" with 245 PS (241 hp) can be ordered, but haven't aren't in dealerships yet.

In the two videos below, you'll get to sample the power and performance of the Cupra Formentor, a car that is rarely talked about or reviewed. Of course, acceleration is the focus here, and it doesn't disappoint. The performance crossover is timed from 0 to 100 kph (62 mph) in 4.85 seconds, meaning it's quicker than officially claimed, even under wet conditions. And because this test takes place in Germany, it's possible to see it reaching its electronically-limited top speed of 250 kph or 155 mph.

So should you consider buying a model like this? Well, we feel that the Cupra Formentor is either going to be forgotten with time or will be considered a desirable rarety. The styling is undeniably interesting and unique, though there are traces of Leon's inspiration. Likewise, the interior looks like that of a Leon, but with many interesting features, such as the dark blue upholstery and the sharp steering wheel with large paddles and R8-like buttons.

It's possible that the Formentor will be rare and thus difficult to keep on the road later on. But the 2.0 TSI should be sold, having been in production for many years and getting gradually more reliable. Our only slight worry is that the Golf R engine lost its dual-injection when WLTP kicked in back in 2019. So we might see carbon buildup later on. 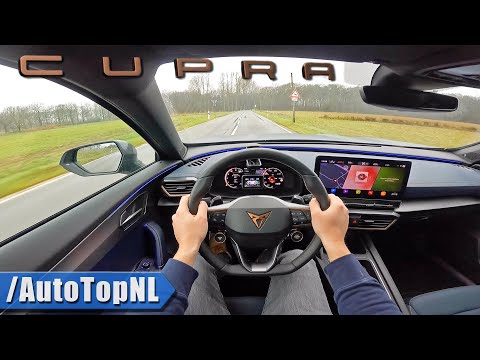